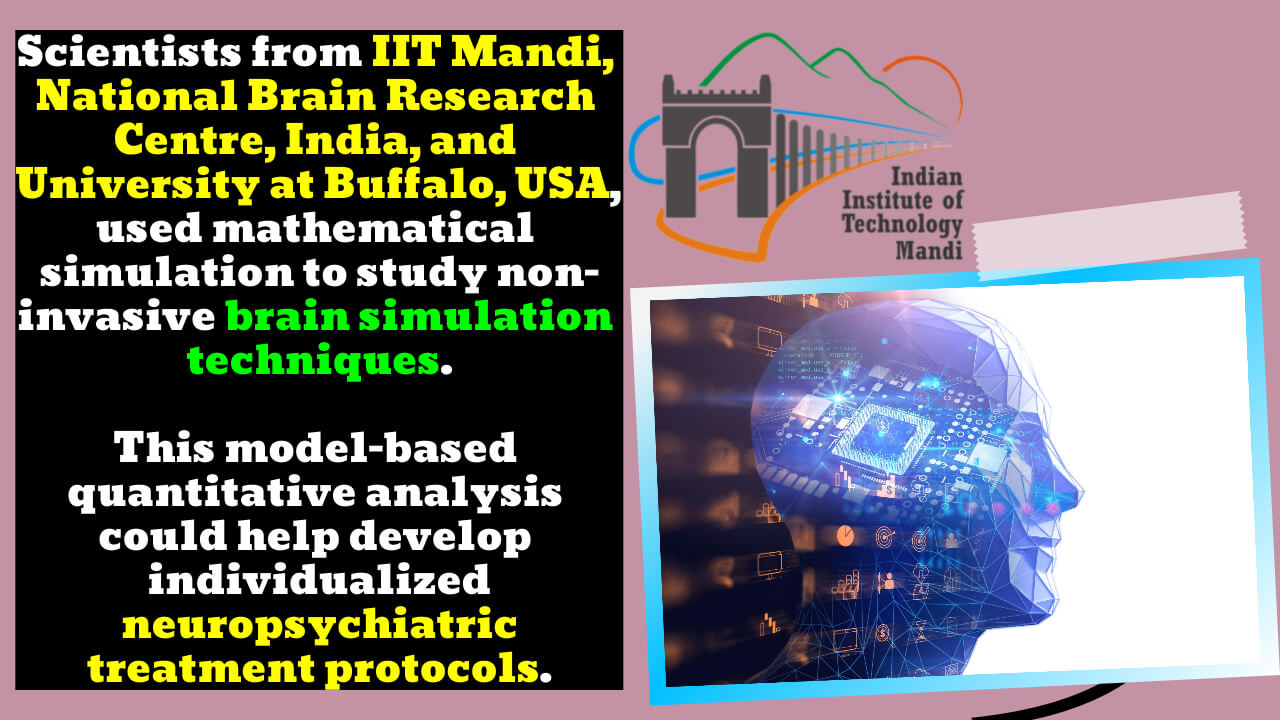 Transcranial electrical stimulation (tES) is a way to stimulate the brain that doesn’t hurt. It sends an electric current through parts of the brain to study or change how the brain works. It was also found that the first effects of tES on the blood vessels were also found to happen through the perivascular space.

A team of scientists from the Indian Institute of Technology (IIT) Mandi, the National Brain Research Center, India, and the University at Buffalo, USA, worked together to do mathematical simulation studies on non-invasive brain simulation techniques.

A brain stimulation technique called transcranial electrical stimulation (tES) is non-invasive and passes an electrical current through parts of the brain to study or change how the brain works.

Brain and neuro-specialists can use the findings from this study to plan personalized neurorehabilitation activities for people who have had strokes, traumatic brain injuries, mild cognitive impairments, Alzheimer’s disease, and other neuropsychiatric disorders. Such a mathematical model-based quantitative analysis could help people with neuropsychiatric disorders get the best treatment possible. The team will do experiments that will block different pathways to make sure their modeling results are correct.

An international team of scientists led by the Indian Institute of Technology Mandi (@iit__mandi) has performed a mathematical simulation studies on non-invasive brain simulation techniques. pic.twitter.com/ad4GDlJ1Da

IIT-Madras Team mimic natural processes to convert saline seawater into drinkable freshwater
A multinational team of scientists has pioneered a novel method of seawater treatment. They enhanced existing
IIIT-H takes on project Telugu Wiki to create Telugu content under “Project Indic Wiki.”
It’s called Project Indic Wiki, and it’s a goal of IIIT-H to make Wikipedia more useful in Indian languages
Researchers at IIT Madras have developed a motion planning algorithm that can think like a human
Researchers at the Indian Institute of Technology, Madras, have developed a new class of algorithms that are
Pradhan: IIT-Kharagpur should be at the forefront of innovation for the MSME sector
Minister Dharmendra Pradhan was speaking at the 67th Convocation of IIT Kharagpur, which is part of the
Scholarships for Women Education Promotion are announced by IHub-Data and IIIT-H
iHub-Data at IIIT Hyderabad gives scholarships to women who want to learn more about machine learning through
IIT-Roorkee took the top spot in the “Most Innovative Institutions” category by the CII.
The Indian Institute of Technology, Roorkee, takes first place in the CII’s “Most Innovative Institutions”
IIT Bhubaneswar Team has designed and developed low-power semiconductor chips
The Indian Institute of Technology Bhubaneswar has made semiconductor chips that use less power. People who
The IIT Roorkee has opened a bio-incubator for research and product development.
Launched by the Indian Institute of Technology (IIT) in Roorkee, the bio incubator will help new businesses

Leave a Reply to IIT (BHU) researchers claim that 'mosambi peels can prevent cancer and other fatal diseases. Cancel reply

Researchers at IIT Mandi generate electricity by using lights that are...

Researchers from IIT Jodhpur have produced materials for photosynthesis that can...