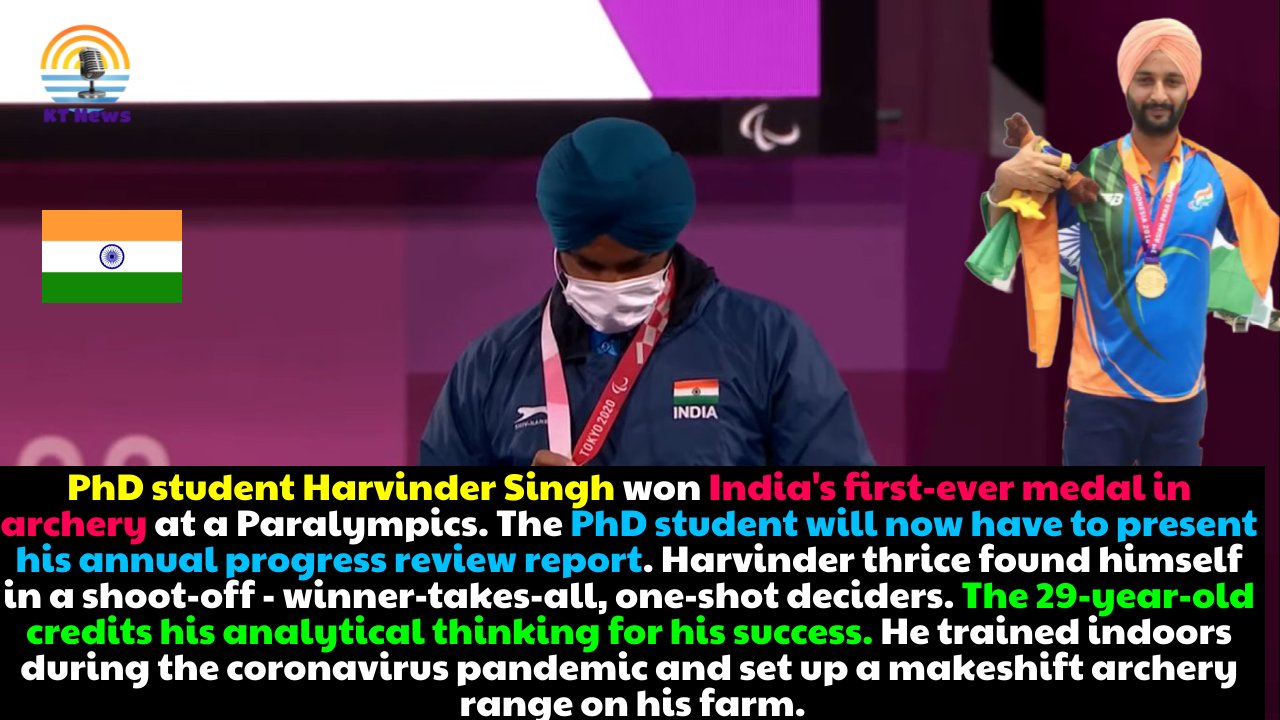 Harvinder Singh won India’s first-ever Paralympic medal in archery. The PhD student will now be required to submit his annual progress report. Harvinder was involved in three shoot-outs, all of which were winner-take-all, one-shot deciders. The 29-year-old attributes his achievement to his analytical thinking. During the coronavirus outbreak, he trained indoors and put up a makeshift archery range on his farm.

As the Tokyo Paralympics 2020 come to a close, the Indian contingent has already set a new record for the games. Day 10 in Tokyo began with Avani Lekhara, a 19-year-old shooting phenom, securing her second medal at the 2020 Paralympic Games by making an incredible comeback from sixth place to third, defying all chances. With this achievement, she became the first Indian woman to win two Paralympic medals.

Next, Praveen Kumar won a silver medal in the high jump event thanks to his perseverance. He then went on to win India’s 11th medal at the games. In addition, archer Harvinder Singh won India’s sixth bronze medal by defeating Korea’s Min Su Kim. However, with so many Indian competitors competing on Day 10 of the Tokyo Paralympics 2020, let us take a closer look at their individual performances.

Performances of Indian athletes on Day 10 of the Tokyo Paralympics 2020 Games: Friday, September 3

Harvinder Singh made history by defeating Stefano Travisani of Italy in the 1/16 Eliminations. Following that, he defeated Germany’s Maik Szarszewski, followed by triumphs over Kevin Mather (Bronze Playoff Game) of the United States and Korea’s Min Su Kim of Korea to claim India’s fifth bronze medal.

The second archer in play was Chikara Vivek, who defeated his SriLanka opponent in the 1/16 Elimination match. After that, he lost his 1/8 elimination round match against David Phillips of the United Kingdom.

Prachi Kohli and Parul Parmar of India competed against Faustine Noel and Lenaig Morin of France, with the former losing 21-12, 22-20 and being eliminated from the group stage.

Krishna Nagar kicked up his campaign with a 2-0 win over Vitor Tavarez of Brazil in the men’s singles (SH6) group stage match.

Suhas Yathiraj competed in Men’s Singles and claimed two victories in both of his group matches. However, he lost his third group stage game to Lucas Mazur of France. Yathiraj, on the other hand, will compete in his semi-final tomorrow against Indonesia’s Fredy Setiawan.

Tarun Dhillon, another Indian shuttler competing in the Men’s Singles event, suffered the same fate as Yathiraj and lost his final group stage match to Indonesia’s Fredy Setiawan. He, too, will play Lucas Mazur in the semi-final game tomorrow.

Manoj Sarkar, the last Indian shuttler to compete in the Men’s Singles event, won his group stage game against Ukraine’s Oleksandr Chyrkov. His next match is tomorrow against Daniel Bethell of the United Kingdom.

Pramod Bhagat and Palak Kohli advanced to the semi-finals of the mixed double badminton event by defeating Thailand’s Siripong Teamarrom and Saensupa. The former were defeated in their first match by the dominant French combo of Noel and Lucas Mazur.

Following the shuttlers’ outstanding results, the Indian swimmers failed to live up to expectations, with both Suyash Narayan Jadhav (fifth in heat) and Niranjan Mukundan (last in heat) failing to qualify for the finals.

With a season-best score, Jonathan Broom Edwards won the gold medal in this event. Praveen Kumar of India came so close to breaking the 2.10m bar in his second attempt. He had to settle for a silver medal after failing.

Soman Rana of India was a whisker away from clinching a bronze medal in the F57 event, finishing fourth in the finals.

With two Indian athletes competing in this event, Kashish Lakra placed sixth and Ekta Bhayan placed last in the finals.

Avani Lekhara, 19, refused to leave the competition without winning another gold medal after winning one previously. After finishing sixth after six series, Lekhara staged a miraculous comeback to take bronze with a score of 445.9 points.

Deepak Saini competed in the R7-Men’s 50m Air Rifle event, however he did not have a particularly strong showing.

The third medal of the day for the nation. 💪#Tokyo2020 #Paralympics @ArcherHarvinder pic.twitter.com/dwWTh2ViZN

RT @Sportskeeda: Presenting you “Harvinder Singh”, India’s first medalist in #ParaArchery ever at the #Paralympics 🔥 He played 5️⃣ matches…

RT @Jasleen_Kaur11: Many congratulations to Harvinder Singh for winning the bronze medal in the men’s #Paralympics2020. Seeing this, Pakist…

RT @BjpBiplab: First medal in Archery for #India at #paralympics. Congratulations Harvinder Singh for winning #bronze in Archery at #Para…

RT @IndianOilcl: Harvinder Singh notched up India’s 1st ever archery medal in the #Tokyo2020 #Paralympics, holding his nerves in a thrillin…

RT @RanjeetkrDass: Heartiest Congratulations to Harvinder Singh on winning the first ever archery medal in #Paralympics His #bronze win i…