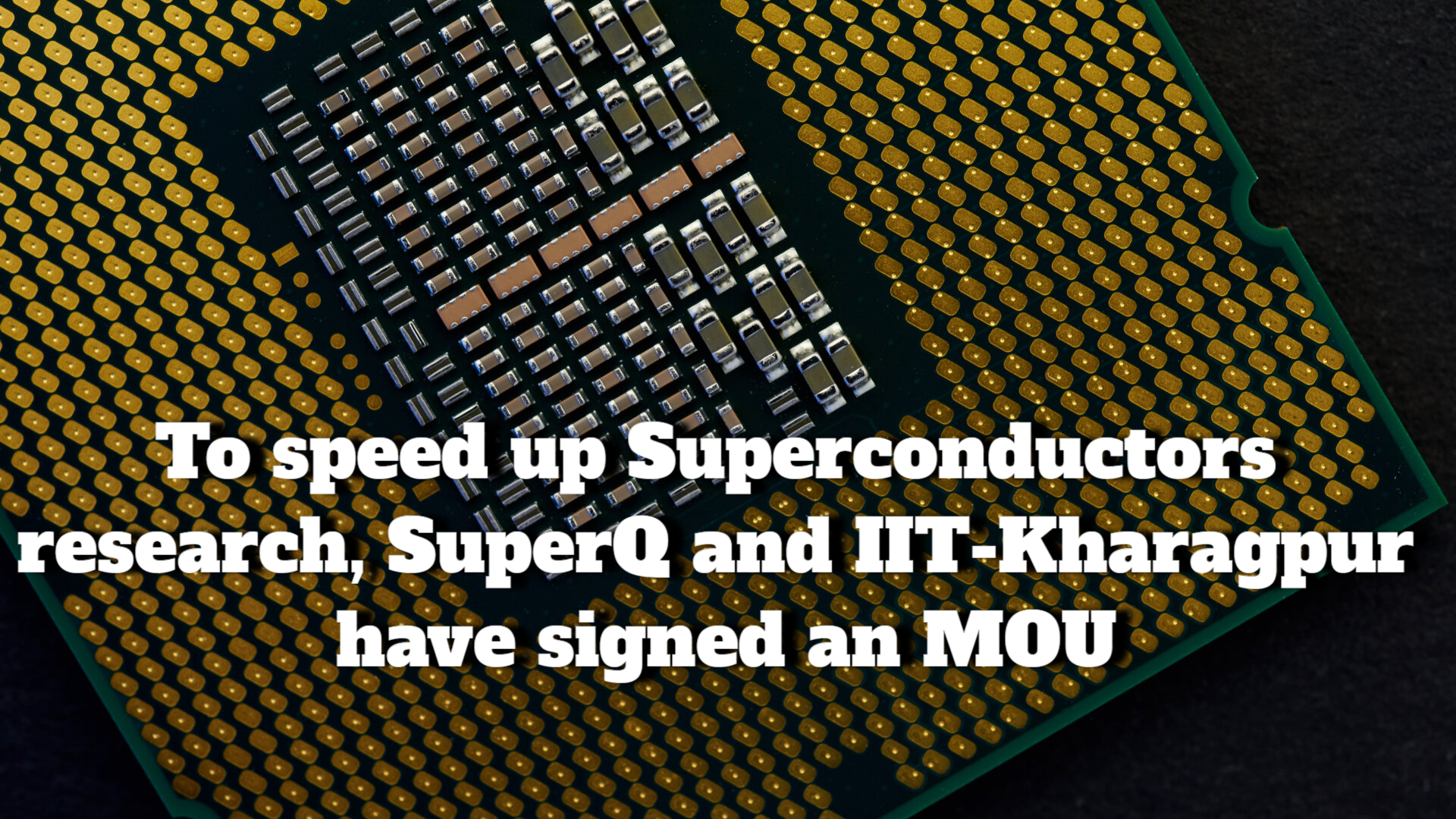 To speed up superconductivity research, Qpi Technology’s subsidiary signed an MoU with IIT-Kharagpur. The development of superconductor-based products, particularly superconducting cables, is expected to open up new markets in a wide range of industries. In the field of superconductivity, SuperQ and IIT-KGP have signed a Memorandum of Understanding (MoU). Prof. Abhay Singh Gour has agreed to offer the SuperQ team a certification program in superconducting as part of the MoU.

A next-generation research and product development firm led by SuperQ’s founder and CEO, Dr. Nagendra Nagaraja, aims to develop and deploy superconducting device technology at an industry-scale. The development of new superconducting-based products will open up new opportunities in a wide range of industries. Health care, power generation, energy storage, and distribution are some examples of these fields. Another is high-energy physics, while a third is quantum computing

According to Professor Abhay Singh Gour of IIT- Kharagpur’s, the SuperQ team plans on speeding up research and development to ensure that Superconductor-based products are more quickly commercially viable and deployed. At SuperQ, we believe that high temperature superconductors have enormous potential and applications in many areas of quantum circuits, quantum networks, electric vehicles (EVs), smart city grids, electrification, and medicine. With this partnership with IIT-Kharagpur, we hope to realize our vision and put our product roadmap into action with early customers by the end of the fiscal year (FY22). To Prof Abhay Singh Gour at the Indian Institute of Technology, we owe our gratitude.

IIT-KGP will continue to work on superconducting cables and tapes as well as fault current limiters while SuperQ’s SSPD product is scaled up for production. The partnership between IIT-KGP and SuperQ has officially been inaugurated, according to SuperQ Material Researcher Dr. Balaji Sompalle. The IIT-work KGP’s in superconductivity and cryogenics has long been known to the scientific community. To build a whole ecosystem for innovation, industrial competitiveness, and convergence, we at SuperQ are going to accelerate research into building superconducting devices. This is a wonderful opportunity for us to work together.

Research in superconductivity and cryotechnologies is limited and slow in India according to SuperQ’s Dr. Manjunath G. In the field of superconducting materials and their applications, our collaboration will speed up research and development at a lower cost to humanity.

Work with IIT-KGP will only help us get there sooner, agrees Dr. Purnima Sethi, Fabrication Research Scientist at SuperQ. “We have a role to play in building the future of next generation superconductor-based technologies.

Pinakin Padalia, QpiAI’s Director of Quantum Circuits, said the agreement would be beneficial for both research and industrial development of superconducting solutions.

In accordance with the agreement, Prof. Abhay Singh Gour will provide the SuperQ team with a superconductivity certification program. SuperQ offers internships and joint research proposals to students who want to take their laboratory research to the next level.

Professor Amlan Mukherjee of QpiAI said, “Superconductivity is a remarkable quantum phenomenon that promises to unleash an enormous number of technological innovations and applications.” Until now, there has been very little industry participation in this area in India. We are making progress and laying the foundation for the quantum future because of the Memorandum of Understanding we signed with IIT-KGP.

In their respective fields of work, both SuperQ and IIT-KGP are excited about how this partnership will bring a paradigm shift and navigate advancements in the superconducting domain.

Disclaimer: Business Wire India distributes this content. These materials were developed independently, without the involvement of any HT staff members.

SuperQ and IIT-Kharagpur have signed a MOU to speed up superconductivity research
To speed up superconductivity research, Qpi Technology’s subsidiary signed an MoU with IIT-Kharagpur. The
Applied Materials India and IIT (BHU) Varanasi collaborate on semiconductor research
The Indian Institute of Technology (BHU) Varanasi is working with Applied Materials India Pvt. Ltd. By
IIT-Kanpur’s new study praises the Covid-19 Model of Uttar Pradesh
A study by IIT-Kanpur lauded Uttar Pradesh’s Covid-19 system of pollution control. During the height of the
Five years after its inception, IIT-Goa still awaits the allotment of campus land
For the time being, the permanent campus of the Indian Institute of Technology in Goa is being planned. It
NIT Sikkim BTech students now have access to direct admission to IIT Delhi PhD programs
IIT Delhi and NIT Sikkim have inked a memorandum of understanding (MoU) to allow BTech students to apply
IIT Kanpur, University of Queensland, conduct pathbreaking work on inflammatory diseases
An international team of scientists has discovered immune system components that may aid in the fight against
IIT-Kanpur-backed startup gets investment from Alia Bhatt
Phool.co is a wellness start-up that sells directly to consumers (D2C). The Bollywood star Alia Bhatt has
IIT Hyderabad researcher develops a noise-controlling sheet absorber by mimicking bee hives
Acoustic energy is dissipated to low frequency ranges by sound-absorbing panels made of paper and polymer