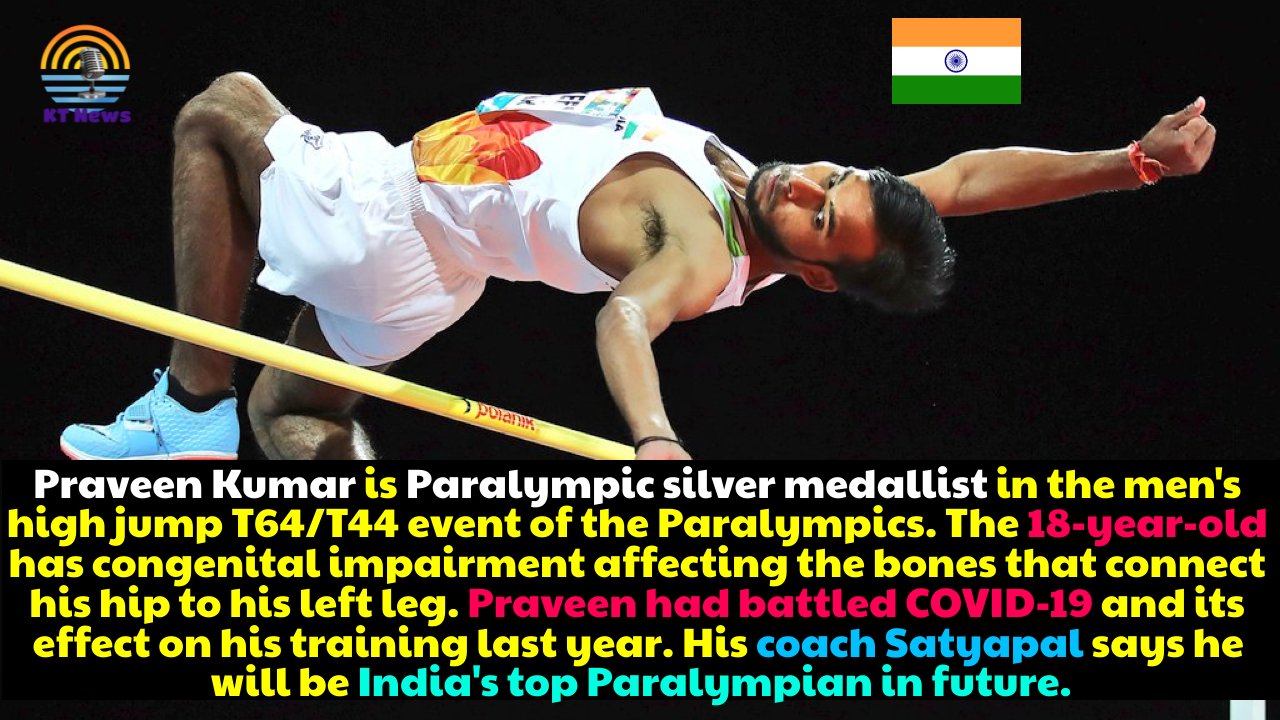 Praveen Kumar won a silver medal in the men’s high jump T64/T44 event at the Paralympics. The 18-year-old has a congenital problem with the bones connecting his hip to his left leg. Last year, Praveen faced COVID-19 and its impact on his training. Satyapal, his coach, predicts that he would be India’s greatest paralympian in the future.

Praveen Kumar never saw himself as a Paralympic silver medalist at the age of 18, but as a dedicated athlete, he left no stone abandoned to reach to this point, even if it meant constructing a temporary practice facility for himself while stadiums were closed due to COVID-19 lockdowns. (More Sports Information)

Praveen, the son of a poor farmer from a village near Jewar in Gautam Buddha Nagar district, won silver in the men’s T64/T44 high jump event this morning, setting a new Asian record of 2.07m.

Last year, the teenager fought COVID-19 and its impact on his training. Praveen had dug out a tiny pit near his residence and filled it with soft mud to ensure he could continue practicing despite not having access to a landing mattress, as he was desperate to train for the Games here.

He made the distance to keep his knees from taking too much punishment.

“Sports were a big part of my high school experience. But I had no idea at the time that I would one day achieve this level. I used to play volleyball in school, but after learning about para athletics, I switched to high jump “Praveen spoke at a virtual news conference hosted by Eurosport and the Indian Paralympic Committee.

“I found out about the Paralympics and how to participate after doing some research on Google,” said the high jumper, who suffers from a congenital condition that damages the bones that link his hip to his left leg.

Praveen explained how he got to this position by saying, “I competed in a district level tournament and met Ashok Saini sir, who provided me Satyapal sir’s phone number (his current coach).

“I contacted (Satyapal) sir, who determined which classification I would compete in. He recognized me and said he’d bring me in. The year was 2018 “Praveen, a second-year B.A. student at Delhi’s Motilal Nehru College, said as much.

Praveen, who is in his second year on the international circuit, said that at first, his classmates and teachers were unsure how he would fare in his sport given his disability, but that they eventually came around and began to encourage him.

“People started supporting me when I won silver in the junior para athletics world championships in 2019 and gold in the para athletics Grand Prix earlier this year (in Dubai),” she says.

In 2019, he came in fourth place at the Para Athletics (senior) World Championships.

When asked about the competition on Friday, he stated, “When I cleared 1.97m on my second attempt, I was a little nervous, but after jumping 2.01m, I felt much better. I promised myself that no matter what, I would give it my all, rain or shine.

“When attempting to jump 2.10 meters, there was a lot of strain. In the final attempt, I simply thought of doing my best, and it was a great effort, but there were some issues with my landing, and I was unable to clear it “Prime Minister Narendra Modi congratulated Praveen over the phone.

Satyapal, Praveen’s instructor, had some reservations about the youngster’s tiny stature, but discovered that Praveen’s right leg had exceptionally strong muscles.

“His left leg is the one that is damaged, while his right leg has really powerful muscles. As a result, despite his small stature, I took him under my wing. Satyapal told PTI that his ward’s height, which is around 5’5”, is highly essential in high jump.

“In 2018, he came to me with his father, and I discovered his talent. He comes from a humble household, yet he is incredibly sincere and committed.”

Praveen contracted COVID-19 in April and was unable to train adequately this year.

“He was unable to train effectively due to lockdowns. Mattresses are required for high jumpers to train, but he was unable to do so because the stadiums were closed. In addition, he was diagnosed with COVID-19 this year “Praveen is trained by Satyapal at Delhi’s Jawaharlal Nehru Stadium.

Praveen, according to Satyapal, is a lock for a gold medal at the Asian Para Games in Hangzhou, China, next year.

“He only began competing in international events two years ago and has already won a silver medal in the Paralympics. He is only 18 years old, yet he has already established himself as the country’s top paralympian.

“Our goal is to win the Asian Para Games next year and to win gold with a world record at the 2014 Paris Paralympics.”

Athletes with a leg deficiency, leg length discrepancy, decreased muscle power, or impaired passive range of motion in the legs are classified as T44.