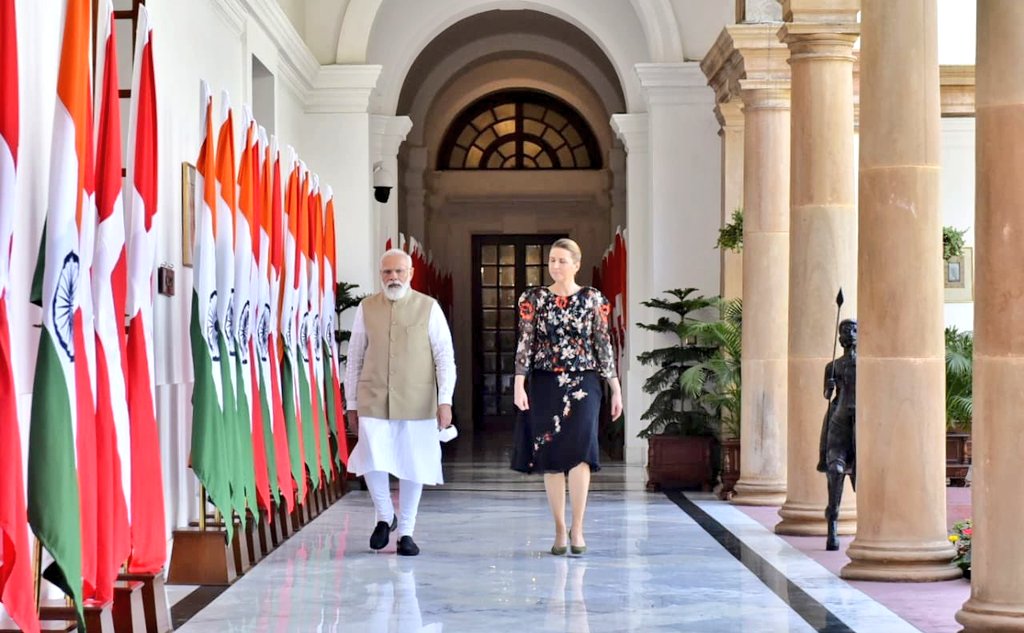 India and Denmark exchanged four agreements. Prime Minister Narendra Modi met with his Danish counterpart, Mette Frederiksen, and signed an MoU due to their discussions.. S Jaishankar, India’s External Affairs Minister, stated that the visit would help advance the two countries’ Green Strategic Partnership. Mette Frederiksen, the Danish prime minister, is in India for the first time. Prime Minister Modi welcomed her at Rashtrapati Bhavan, where she later paid her respects to Gandhi at Rajghat. As a result, Denmark views India’s visit as a significant moment for the two countries relationship.

CSIR-NGRI Hyderabad, Aarhus University, Denmark, and the Geological Survey of Denmark and Greenland have signed a first Memorandum of Understanding (Mou) on mapping groundwater resources and aquifers.

The Traditional Knowledge Digital Library Access Agreement was signed by the Danish Patent and Trademark Office and the Council of Scientific and Industrial Research.

The Indian Institute of Science, Bengaluru and Danfoss Industries Private Limited signed a third Memorandum of Understanding to establish a Centre of Excellence for natural refrigerants for tropical climates with potential applications.

The fourth agreement was a Joint Letter of Intent between the Indian and Danish Ministries for Skill Development & Entrepreneurship.

EAM S Jaishankar met with Prime Minister Mette Frederiksen of Denmark earlier today and stated that her visit to India will help advance the two countries’ Green Strategic Partnership. He also met with other foreign ministers.

The Danish Prime Minister described her trip as a watershed moment in bilateral relations between her country and the United States. The Indian government regards us as a close ally. “I see this visit as a turning point in bilateral ties between Denmark and India,” she said.

After the welcome ceremony at Rashtrapati Bhavan, Frederiksen said that she expects an ambitious Indian government to take responsibility for the issue of green transition in India and the rest of the world.

On Saturday morning, the Prime Minister of Denmark arrived in New Delhi. At the Delhi airport, she was greeted by Meenakshi Lekhi, Minister of State for External Affairs. Speaking on behalf of the ministry, Arindam Bagchi said the visit of the Danish PM is an opportunity to review and advance the India-Denmark Green Strategic Partnership. A meeting with President Ram Nath Kovind is on Frederiksen’s agenda. Along the way, she’ll meet with think tanks, students, and other members of the community.

Indian officials hailed her visit as historic, noting that it was the first by a head of state since cOvID-19 travel restrictions went into effect in March of last year. Early this year, EAM Jaishankar also paid a visit to the Danish capital of Copenhagen. (ANI)

It was a privilege to bid farewell and see off Her Excellency Mette Frederiksen,the Prime Minister of Denmark, at New Delhi International Airport, after she successfully concluded her 3 day visit to India. pic.twitter.com/vcizCGCZKf

India-Denmark are partnering on several fronts such as clean energy under the Green Strategic Partnership and Agro-Tech.

Danish companies have been India for a long time and have played a key role in helping ‘Make In India for the World’ succeed.

The CSIR-NGRI will use artificial intelligence and machine learning in geosciences
The CSIR-NGRI will use artificial intelligence and machine learning in geosciences, such as imaging the deep
CSIR develops technology for satellites to replace expensive imported electronics
Indian experts have created Toxic-free and more effective multilayer technology. Satellite communication and
The NCSM and CSIR have signed a memorandum of understanding to integrate science and culture in the country
The National Council of Science Museums and the Council for Scientific and Industrial Research have signed a
Researchers from the CCMB (Divya Tej Sowpati) receive the CSIR Young Scientist Award for their work on COVID-19
Divya Tej Sowpati, a scientist at the CSIR-Centre for Cellular and Molecular Biology (CCMB), worked on genome
CSIR-NCL, RIL team pooled resources to produce useful products from the COVID-19 PPE waste
Reliance Industries Ltd. and the CSIR-National Chemical Laboratory in Pune are currently testing a pilot
Solar DC Cooking System for a Green and Pollution Free India developed by CSIR-CMERI
The Asansol Braille Academy in West Bengal received the Solar DC Cooking System from CSIR-CMERI. The
For better economic outcomes, the CSIR and industry must collaborate: Dr. Jitendra Singh
For the greatest and most cost-effective results, CSIR and industry must engage on an equal level, according
CSIR transfers RT-PCR technology for saline gargle testing to MSME industry
The technology has been passed to the Ministry of Micro, Small, and Medium Enterprises of the Union. It’s