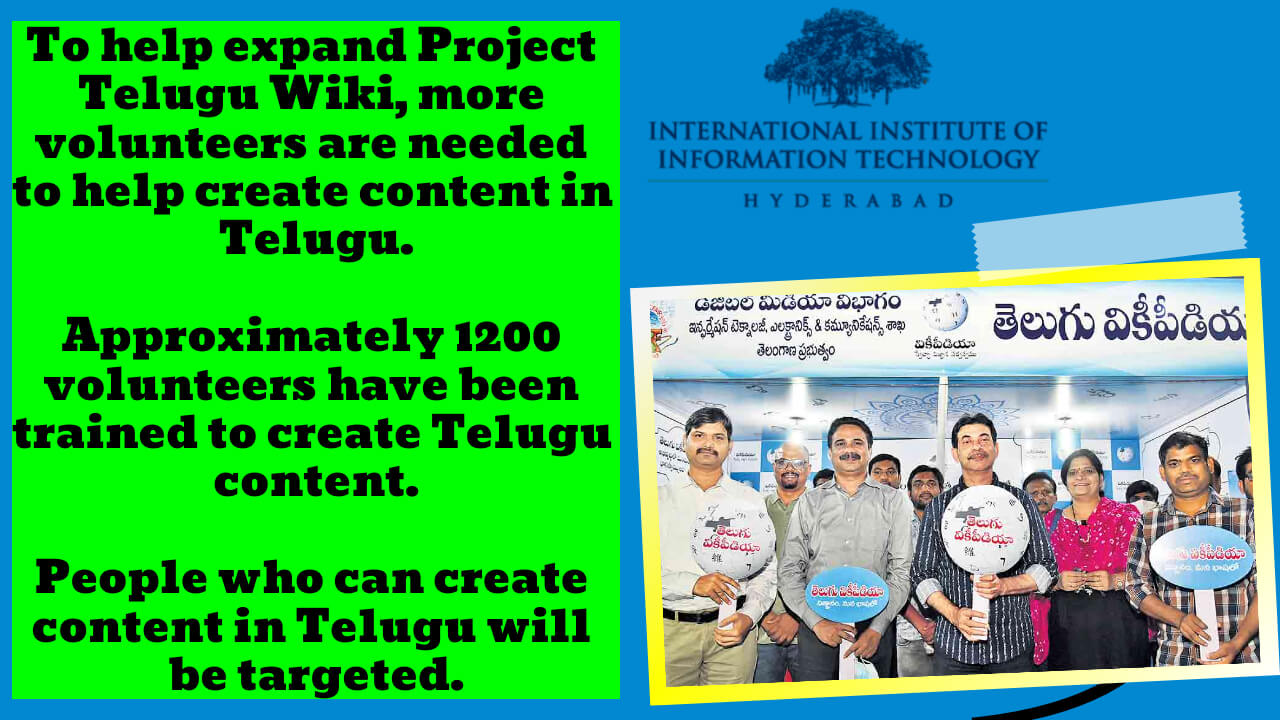 It’s called Project Indic Wiki, and it’s a goal of IIIT-H to make Wikipedia more useful in Indian languages by adding more content. More than 1,200 volunteers have been taught how to write in Telugu, and they’ve already been able to do it.

The number of people who use the Internet every day in India is getting close to 900 million. By Dileep Konatham, the director of digital media for the Telangana region of India, there is now a Telugu Wikipedia site. A lot of pages have been added to the platform already. This is the second time it has set up shop at the Hyderabad Book Fair, which is taking place now.

Days from now, more people will help with Project Telugu Wiki, which makes reference material in Telugu available on Wikipedia. People are trying to get more people to help write content.

So far, about 1,200 volunteers have been taught how to write in Telugu. Targeted efforts will be made to get teachers, writers, poets, and other people who can write in Telugu to help.

IIIT-H has started a project called “Project Indic Wiki” to make Wikipedia more useful in Indian languages. The IIIT team came up with software programs and micro content development tools that could be used to write articles about technology, history, personalities, and other subjects.

In this project, the Digital Media wing of the IT department is working with the IIIT-H to spread the word about Wikipedia and increase the number of articles on the Telugu Wikipedia site by a large amount. It also interacts and works with the Telugu Wikipedia ecosystem, which includes government departments, universities, journalists, and students. This helps them figure out how to get people from all walks of life to volunteer to help with the project. It also runs training and workshops to help people build their skills and look for technology that can make it easier to make a lot of Telugu content at once. It also has Te-Wiki internship programs.

The number of people who use the Internet in India is getting close to 900 million. The rise in the number of people who use the Internet has been mostly due to lower costs of data and smartphones that can be bought for less money. “The Internet is getting older, and now people in their 50s and 60s are using it. They want content in their language. In this case, having content in Telugu is very important. There is already some information out there about Telangana history, culture, art, architecture, economy, politics, and other things, but there is a lot more that can be learned about this state. Dileep Konatham, the Digital Media Director for Telanagana, said that these must be available on public platforms to be easily and freely accessed. This is what he said.

Wikipedia is one of the most well-known encyclopedias on the Internet. It started out in English in 2001, but now it can be used in more than 300 languages. People who write Padma, a system for changing the text in Indian scripts between open-source and proprietary formats, used Telugu on Wikipedia in December of 2003. It all started with this, and thanks to the help of a few volunteers, more than 75,000 pages have been added to the platform. For the Telugu Wikipedia, you can use any Unicode Telugu font input system to read the Unicode font.

It set up a booth at the Hyderabad Book Fair at the NTR Stadium, which is near Indira Park in the city. A second time it’s been at the fair. The first time was in 2019. IT and Industries Secretary Jayesh Ranjan opened the stall on Saturday, and it was named after him.

Researchers at IIT Madras have developed a motion planning algorithm that can think like a human
Researchers at the Indian Institute of Technology, Madras, have developed a new class of algorithms that are
Pradhan: IIT-Kharagpur should be at the forefront of innovation for the MSME sector
Minister Dharmendra Pradhan was speaking at the 67th Convocation of IIT Kharagpur, which is part of the
Scholarships for Women Education Promotion are announced by IHub-Data and IIIT-H
iHub-Data at IIIT Hyderabad gives scholarships to women who want to learn more about machine learning through
IIT-Roorkee took the top spot in the “Most Innovative Institutions” category by the CII.
The Indian Institute of Technology, Roorkee, takes first place in the CII’s “Most Innovative Institutions”
IIT Bhubaneswar Team has designed and developed low-power semiconductor chips
The Indian Institute of Technology Bhubaneswar has made semiconductor chips that use less power. People who
IIT Kanpur developed ‘Bhu Parikshak’, a mobile application that can detect soil health in 90 seconds.
A team of researchers at IIT-Kanpur has developed a portable soil testing device that can detect soil health
First-of-its-Kind Nanotechnology Center at IIT Guwahati Is Providing Advanced Infrastructure
IIT Guwahati has built advanced microelectronics and nano energy labs. Officials say the Center for

Researchers at IIT Mandi generate electricity by using lights that are...

Researchers from IIT Jodhpur have produced materials for photosynthesis that can...