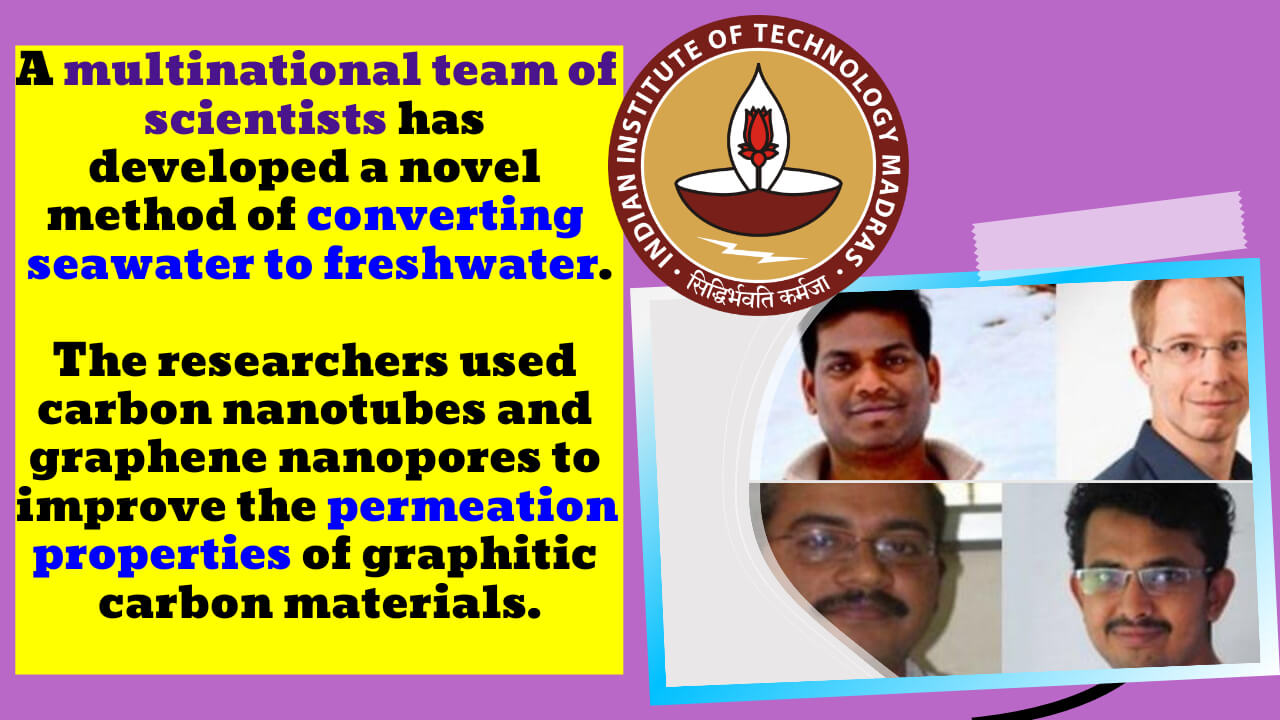 Scientists from all over the world have worked together to come up with a new way to turn seawater into freshwater.

The scientists used carbon nanotubes and graphene nanopores to improve the permeation abilities of graphitic carbon materials. The problem with the previous methods was that they were made of tubes, making it hard for water to get in and out of them.

Carbon nanomaterial-based membranes have been used to separate salts from water because they allow water to pass through them.

Professor Sarith P. Sathian, who led the study, says that hourglass-shaped nanopores allow more water to pass through, which means “the same mechanisms can be used in a different system of nanopores that can provide a higher desalination efficiency.”

The study also found that “ion rejection is largely dependent on the size of the CNTs.” This means that a more efficient desalination method could be developed without sacrificing how much salt is removed during the filtering process.

IIIT-H takes on project Telugu Wiki to create Telugu content under “Project Indic Wiki.”
It’s called Project Indic Wiki, and it’s a goal of IIIT-H to make Wikipedia more useful in Indian languages
Researchers at IIT Madras have developed a motion planning algorithm that can think like a human
Researchers at the Indian Institute of Technology, Madras, have developed a new class of algorithms that are
Pradhan: IIT-Kharagpur should be at the forefront of innovation for the MSME sector
Minister Dharmendra Pradhan was speaking at the 67th Convocation of IIT Kharagpur, which is part of the
Scholarships for Women Education Promotion are announced by IHub-Data and IIIT-H
iHub-Data at IIIT Hyderabad gives scholarships to women who want to learn more about machine learning through
IIT-Roorkee took the top spot in the “Most Innovative Institutions” category by the CII.
The Indian Institute of Technology, Roorkee, takes first place in the CII’s “Most Innovative Institutions”
IIT Bhubaneswar Team has designed and developed low-power semiconductor chips
The Indian Institute of Technology Bhubaneswar has made semiconductor chips that use less power. People who
The IIT Roorkee has opened a bio-incubator for research and product development.
Launched by the Indian Institute of Technology (IIT) in Roorkee, the bio incubator will help new businesses
IIT Kanpur developed ‘Bhu Parikshak’, a mobile application that can detect soil health in 90 seconds.
A team of researchers at IIT-Kanpur has developed a portable soil testing device that can detect soil health