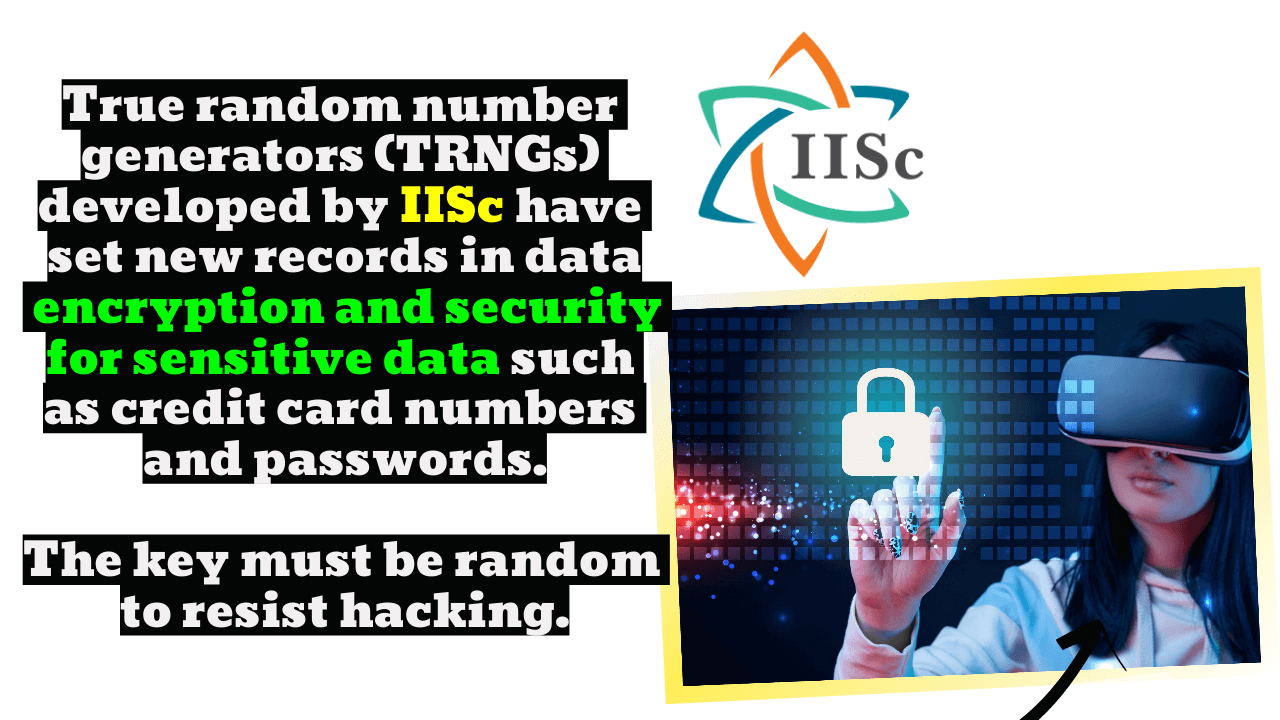 The Indian Institute of Science (IISc) has made a true random number generator (TRNG) that sets a new record. This device can improve data encryption and make sensitive digital data safer.

TRNG gets random numbers from physical processes that are inherently random, which makes it more secure. The device is faster and smaller than optical TRNGs, based on things that happen in the light. Kausik Majumdar says that it can make millions of these devices on a single chip.

The Indian Institute of Science (IISc) has made a true random number generator (TRNG) the most powerful one ever made. It can improve data encryption and make sensitive digital data like credit card numbers, passwords, and other personal information safer.

The study about this device was written up in the journal ACS Nano.

Information that has been encrypted can only be read by people who are allowed to and who have a cryptographic “key.” But to keep hackers out, the key needs to be random and hard to guess.

Most cryptographic keys are made on computers using programs called pseudorandom number generators (PRNGs). These use mathematical formulas or pre-programmed tables to make numbers that look random but aren’t.

On the other hand, a TRNG gets random numbers from physical processes that are inherently random, making it more secure.

In a press release from IISc, it was said that the TRNG device uses the random movement of electrons to make random numbers. It comprises an artificial electron trap made of atomically thin layers of materials like black phosphorus and graphene. When an electron gets stuck in the device, the current measured from it goes up, and when it gets free, it goes down. Since electrons move in and out of the trap at random, the measured current changes at random. The generated random number is based on when this change takes place.

“It’s impossible to know when the electron will enter the trap. So, this process is inherently random,” said Kausik Majumdar, an Associate Professor at the Department of Electrical Communication Engineering (ECE), which made the device. Majumdar led the team that made the device.

Nithin Abraham, a Ph.D. student in the Department of ECE who is part of the team, said, “Almost everything we do on the internet is encrypted for security. This encryption works depend on how well random numbers are made.” Abraham said that the team’s electronic TRNG is also smaller than its bulkier counterparts based on optical phenomena. Majumdar said, “Since our device is all electronic, millions of them can be made on a single chip.”

He and his group want to improve the device by making it faster and coming up with a new way to make chips that would make it possible to make a lot of them.

Majumdar said that the device did better than he expected on standard tests for cryptographic applications made by the US National Institute of Standards and Technology (NIST). “When the idea first came to me, I knew it would be a good random number generator, but I didn’t expect it to have a record-high min-entropy,” he said.