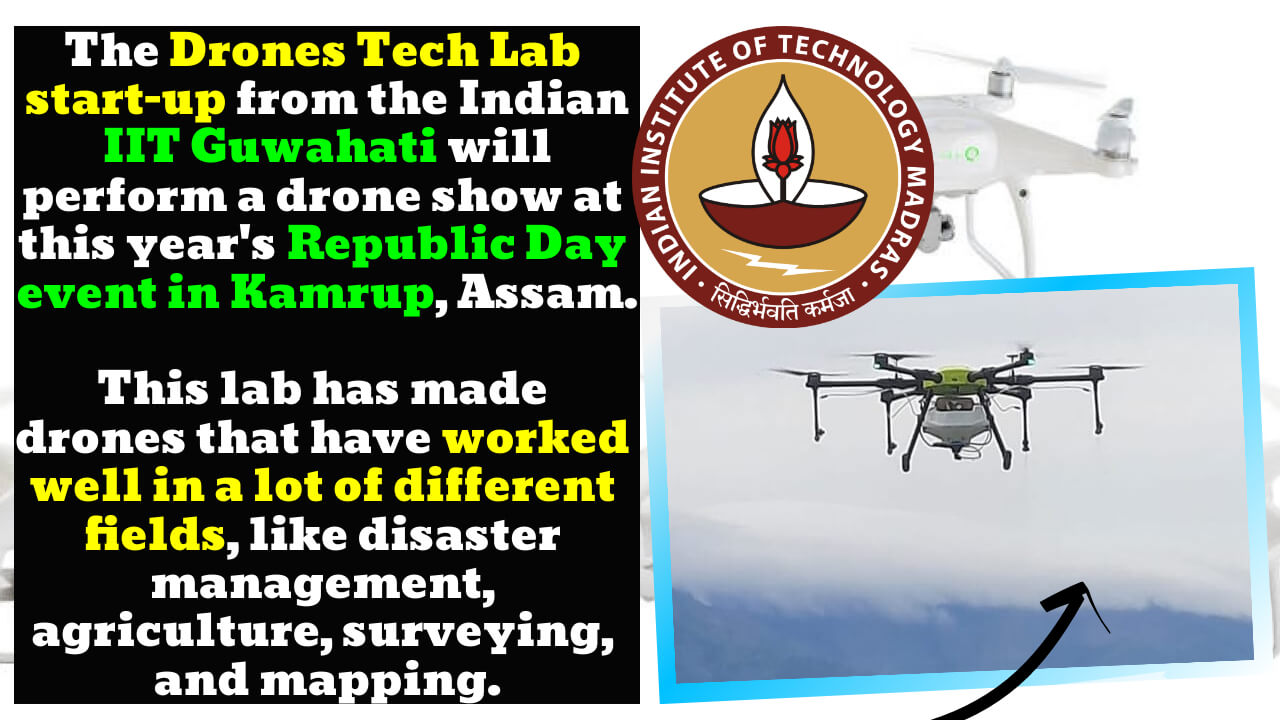 At this year’s Republic Day event, Drones Tech Lab, a drone start-up from IIT Guwahati, will show off their skills with a drone show. The show will be the first of its kind in the north-east region. There are a lot of problems in the North East and East of India that these drones have been able to help with.

The Indian Institute of Technology (IIT) Guwahati’s drone start-up, Drones Tech Lab, will perform a drone show at this year’s Republic Day event in Assam’s Kamrup. The show will be a first of its kind in the northeast region.

The drones developed at this lab have successfully provided solutions in several domains such as disaster management, agriculture, survey and mapping.

IIT Guwahati director TG Sitharam said that since the inauguration of the Drone Centre at IIT Guwahati, the drones developed there have been used for faster data collection in several projects like land survey, river mapping, agriculture, healthcare and disaster management.

IIT Guwahati will maximize its drone-based services to the state and the region. The drone show at Republic Day will help in publicizing this technology for the benefit of the masses, Mr. Sitharam said.

Drones Tech Lab, one of the start-ups at IIT Guwahati Research Park has been at the forefront, technologically and creatively, in promoting disaster management caused by Cyclone Amphan by offering drone technology to aid frontline workers.

Over the years, these drones have been notable for being instrumental in handling some main challenges in India’s North East and Eastern parts.

Biswajit Dey from Drones Tech Labs said that his team was elated to be part of the Republic Day drone show.

“We would like to provide drone services to the region with all the expertise available with us and expand our reach to all possible sectors. This will greatly benefit the population in enhancing various services in a shorter time with higher efficiency,” Mr. Dey said.

The Lab has catered to different markets in Karnataka, Jharkhand, West Bengal, Assam and Meghalaya. The Survey and Mapping conducted finds applications in various domains ranging from mining activities, wherein using drones the exact volume of mine can be assessed with absolute accuracy.

The Drones Tech Lab has revolutionized the survey industry and is using its solutions for various land surveys across different departments.

#RepublicDay celebrations begin in @IITGuwahati as @dronestechlab, an #IITG start-up gears up to perform a drone show at the Republic-Day event in #Kamrup, the first of its kind in the north-east region! #RepublicDay2022 #droneshow #PressRelease pic.twitter.com/tW7RDG4jUn