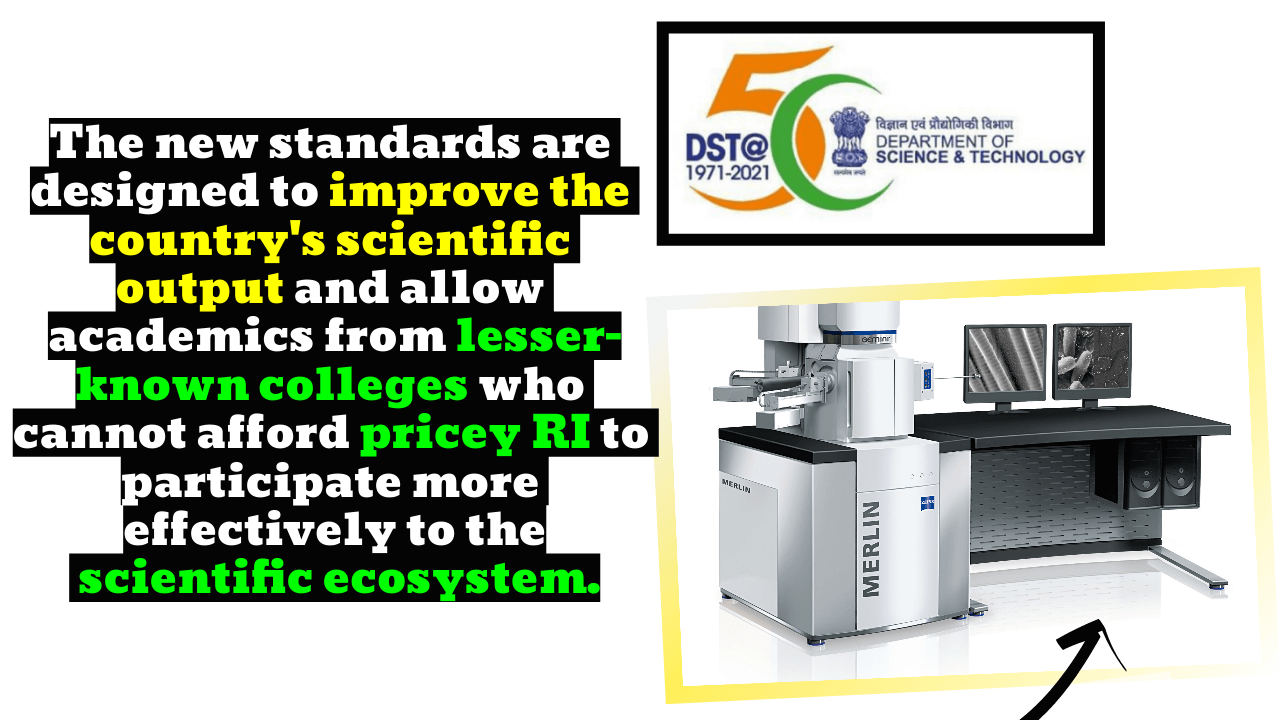 The Center has put out guidelines to help people use and get to this kind of infrastructure more effectively. Suggest making a Cluster Central Instrumentation Facility (CCIF) that will work with businesses.

CCIF can be set up as a public-private partnership (PPP) with revenue sharing. A study by the DST institution shows that 94 percent of the high-end research equipment used in India comes from other countries, while only 6 percent is made in India. Using the Sophisticated Analytical and Technical Help Institutes as a model, independent centers could be set up in IITs, NITs, and other knowledge institutions (SATHI).

To turn scientific instruments in government labs into valuable assets that can be rented out and make money and to make sure that all stakeholders have access to publicly funded research infrastructure (RI), the Centre has come up with guidelines that can help scientists, researchers, and industry professionals from all over the country make better use of such infrastructure and equipment and get wider access to it.

Suggest the creation of a Cluster Central Instrumentation Facility (CCIF) that will work with industries, especially MSMEs and startups, to make it easier to use high-end infrastructure and informational resources for development, testing, standardization, and prototyping. The CCIF could be set up as a public-private partnership (PPP) that shares income.

The guidelines, which the department of science and technology released (DST) on National Technology Day (May 11), told scientific institutions like IITs, NITs, etc., to set up professionally run, independent centers to move toward the goal.

“The DST did a great job with this project. It will help students and young researchers use facilities they wouldn’t be able to use otherwise. National labs have these facilities, but they don’t always use them all. So, by making these facilities available, we help the research community and make up for huge investments, “Former Secretary of the Ministry of Earth Sciences Madhavan Rajeevan said. A study by the DST institution shows that 94% of the high-tech research equipment used in India comes from other countries, while only 6% is made in India.

It is hoped that the new rules will improve the quality of science done in the country and make it easier for researchers at smaller universities who can’t afford expensive research infrastructure to make more important contributions to the scientific ecosystem.

This would cut down on duplicate equipment/RI within the cluster (CCIF), but it would also help the funds be used to buy a wider range of equipment. Private institutions can also be partners in these efforts and benefit from them based on an agreement between them, including a deal on how to pay.

According to the guidelines, there could be enough Sophisticated Analytical and Technical Help Institutes (SATHI)-style autonomous centers in knowledge institutions like IITs, NITs, etc., to cover major sectors. The unique SATHI program from the DST has already set up three centers, one at IIT Kharagpur, one at IIT Delhi, and one at BHU.

“Using what they learn, plans will be made to open five SATHI centers every year for the next four years. These centers have high-end analytical testing equipment and advanced manufacturing facilities, so they don’t have to do the same tests twice and are less reliant on foreign sources, “said the guidelines document.