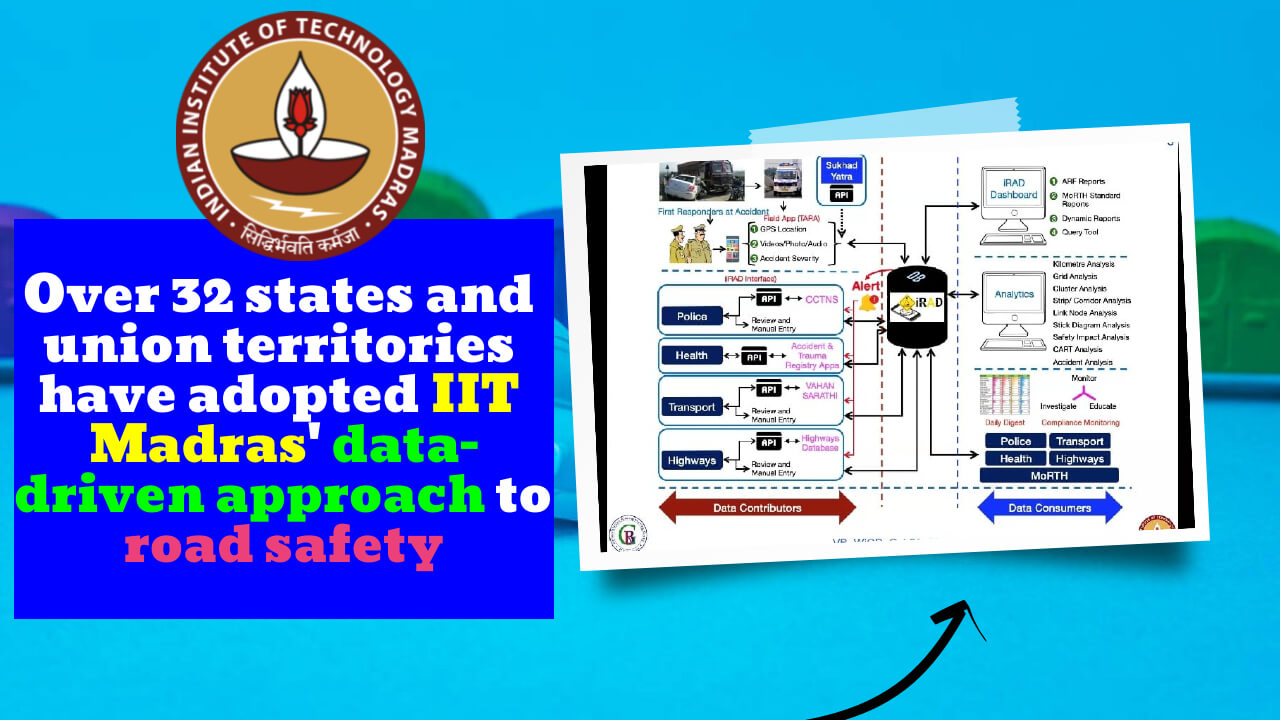 An IIT Madras data-driven model is being used by 32 states and union territories in India. Ministry of Road and Transportation has endorsed the IIT Madras approach, which the World Bank funded and is now being implemented. The minister says that India’s aspiration to become a five trillion dollar economy will only be realized if the roads are safe. Because of the flawed reporting process of police departments, the government’s data on road-related deaths is incomplete. iRAD is one of our most important efforts to improve traffic safety.

The goal of the iRAD project is to improve road efficiency and assess the impact of the improvements that have been made. The model has recorded more than 18,000 accidents in Rajasthan so far.

The Indian Institute of Technology (IIT) Madras has developed a data-driven model used by 32 states and territories to improve road safety, emergency response, and trauma care.

The Ministry of Road and Transportation has officially adopted the IIT Madras model with funding from the World Bank, which experts have cited as a major roadblock in policy-making and implementation in India.

When it comes to reducing traffic fatalities by half by 2030 and eventually eliminating traffic-related deaths, the IIT team has already signed memorandums of understanding with several state governments.

Besides helping states develop strategies and implementation work packages for all stakeholder departments to work on safe roads, the team will also assist in the development of a data-driven trauma care system with an institutional registry.

Road accident information can now be entered into a mobile app, along with photos and videos. A unique ID is then generated for the accident.

At this point, a public works engineer gets a notification on their mobile phone. When they arrive at the accident scene, they look around and enter the necessary information, such as the road design.

IIT Madras will analyze the data gathered to determine if corrective measures in road design are necessary. It is everyone’s responsibility to ensure the safety of the roads. Data-driven strategy development is critical. Balasubramanian believes that a design thinking approach is necessary to solve the problem by identifying the issues and implementing sustainable changes in the local context.

The non-fatal injury data in India is unreliable, according to a recent study by the Indian Institute of Technology Delhi (IIT Delhi). Many road safety experts have also pointed out that there is significant under-reporting in rural India and a lack of public trust in the police in the government data on road crash deaths.

It is only when the country’s roads are safe that India can achieve its goal of becoming a five trillion dollar economy, minister Nitin Gadkari said.

Even though we’ve consistently exceeded our goals for laying roads, we’ve been dampened by the losses we’ve suffered in the form of traffic collisions.” To improve transportation efficiency and propel the country on its path to development, the ministry places a high priority on road safety,” he said.

According to officials from the Road and Transportation Ministry, a new project will help improve the country’s accident databases.

One of our most important road safety initiatives is iRAD, which IIT Madras developed. It has made it possible for all parties involved in an accident to collect data in a structured manner. Across India, a single platform is being used. According to Giridhar Aramane, secretary of the Ministry of Road Transport and Highways: “It will help the states and central government and all stakeholders to develop strategies to improve road efficiency, and to assess the impact that improvements made.”

According to the team from IIT Madras, analyzing road accident data across the country using data analytics will yield a wide range of findings.

When it comes to making decisions, “the proposed system would present the analysis output through Monitoring and Reporting dashboards as well as Analytics dashboards for easy understanding,” a researcher on the team explained.

With the help of the iRAD project, Rajasthan has trained its staff in over 30 districts to implement it.

Over 18,000 accidents have been logged in the state since the model was implemented nearly six months ago.” Over speeding accounted for more than 70% of the state’s road accidents. Still, road engineering problems ranked second, according to Rajasthan Transport Commissioner Mahendra Soni. A “game-changer” in the road safety effort will be the integration of iRAD with insurance services, an integrated ambulance registry, and mapping of trauma care.

IIT Delhi Has Inaugurated 3 New Laboratories At Its Centre For Electric Vehicle Technologies
Indian Institute of Technology Delhi has opened three new electric vehicle laboratories at the institute. The
Two major learning and research centres have been established at IIT Kanpur
IIT Kanpur’s Shivani Centre for the Nurture and Re-Integration of Hindi and other Indian languages
A startup founded by IIIT-Hyderabad alumni receives $69 million in funding
Investment group GEM Global Yield LLC has invested $69 million in BlueSemi. In less than 60 seconds, the
Keeping up with the times, IITs accept stock donations from alumni
Indian Institute of Technology, Delhi alumni, has contributed $1 million in business stock to the school.
IITs and ICMR have partnered for Make-in-India product development and commercialization
The Indian Institutes of Technology (IITs) and the Indian Council of Medical Research (ICMR) have formed
IIT Bombay is India’s top university, ranking 42 in QS Asia University Rankings 2022
Today, Quacquarelli Symonds issued the 2022 QS Asia University Rankings. IIT Bombay earned a score of 71 out
Labs at IIT Indore will be virtually accessible to students of other institutions
Thanks to the institute, students from other academic institutions will be able to use IIT Indore’s modern
IIT-Madras has set up an incubation cell modeled after Stanford University
The Indian Institute of Technology-Madras incubation cell is based on the one at Stanford University. The