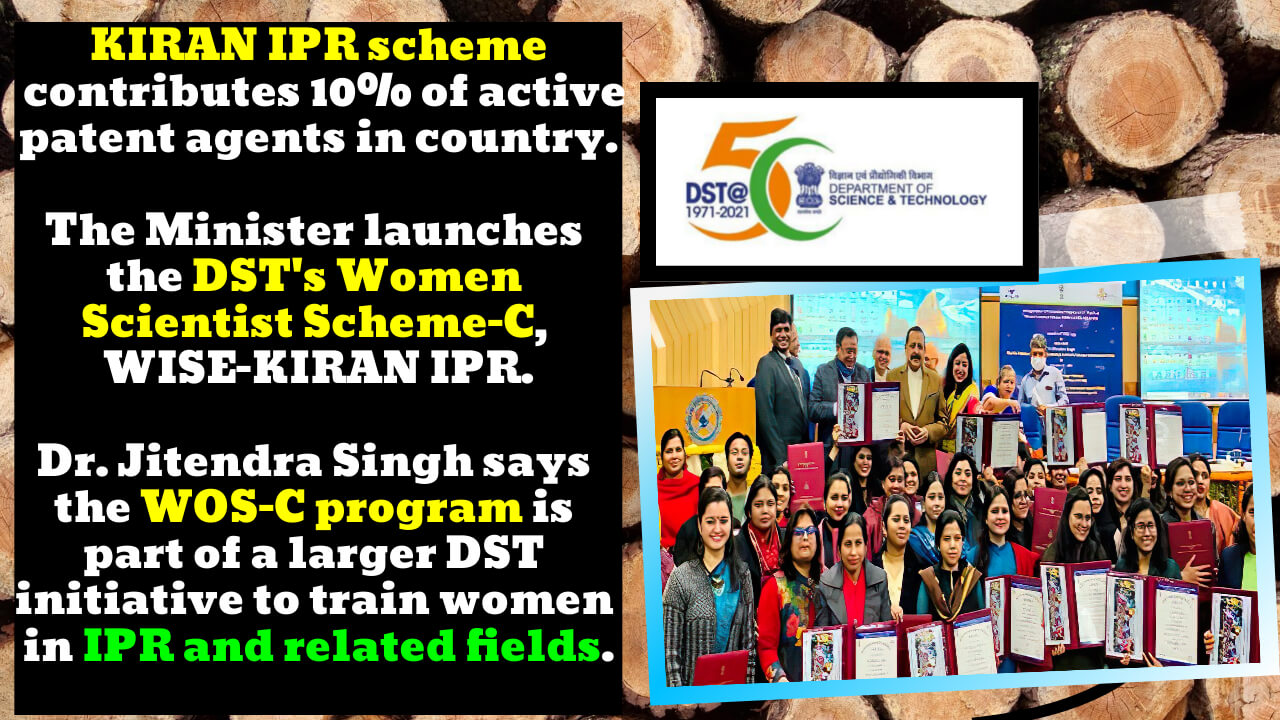 Dr Jitendra Singh said that only 20 women were initially trained per year, but that number has grown to 120. The 11th batch of WOS-C, dubbed KIRAN IPR, received certificates for completing the one-year hands-on training on IPR. In addition, Dr. Jitendra Singh launched TIFAC Mobile App.

Dr. Jitendra Singh spoke at the start of the 12th batch of the Women scientist Scheme-C, WISE-KIRAN IPR of DST training program today. He said that many of the big scientific projects, like Gaganyaan, are being led by women scientists. He said that even during the COVID pandemic, the Women Self Help Groups from the Northeast led the way by giving out a lot of face masks in different designs and colors to match people’s clothes. Then, big brands started making the same thing. He said that one of the main parts of Prime Minister Narendra Modi’s New India is the success stories of women who are making things in India.

The Minister said that when Narendra Modi became Prime Minister in 2014, he took many steps to make sure that women could play a bigger role in science. He said they all have a strong scientific foundation, from the Swachh Bharat Mission to the Ujjawala free gas cylinders that help rural women fight toxic smoke in their lungs, which can damage them over time.

People who went through the Women Scientist Scheme-C (KIRAN IPR) program makeup 10% of the active patent agents in India, said Dr. Jitendra Singh at a meeting. He noted that DST is working hard to make it easier for women to work in science and technology. The “Wos C” program has had a significant impact on the IPR ecosystem in India. It’s not just about empowering women, the Minister said. It’s also about building up the country’s S&T ecosystem.

WoS-C is a program run by the Technology Information, Forecasting, and Assessment Council (TIFAC), a think tank about technology and policy, run by the Department of Science and Technology (DST). It’s meant to bring back women who couldn’t make it in science and technology because of domestic reasons into the professional field.

It’s part of a more extensive program in DST that aims to teach women about IPR and other things. The WOS-C program is part of that more comprehensive program. He said that only 20 women were trained in one year when the scheme started. Over the years, the number of seats has grown to 120. The government is paying women for one year to get training in IPR. This doesn’t strain the family while the women are being trained.

Dr. Jitendra Singh said that the Women Scientists Scheme was started in 2002 when the then Prime Minister Atal Bihari Vajpayee was in charge. He said that the scheme was started under his leadership. Using the New IPR Policy of 2016, which was put in place by Prime Minister Modi and had a lot of different parts, the Minister said that women could play a significant role in society because they can help with the development and use of Patents. This way, they can benefit community as a whole.

People who work for the government, like Dr. V.K. Saraswat, the chairman of TIFAC’s governing council, said that TIFAC was doing an excellent job with Technology Foresight, helping entrepreneurs, and so on. He said that the Women Scientist Scheme has helped improve the quality of patents because the women are well-qualified in their fields of work and have a lot of training on IPR and patents.

People at the Department of Science and Technology (DST) were happy about the program’s results. They said they would help TIFAC get all the help from DST. Shekhar Mande, the head of the CSIR, praised the collaboration between TIFAC and the CSIR so that these trainees could get hands-on training and contribute to the IPU of CSIR. It was also talked about by Dr. NishaMendiratta, the head of KIRAN IPR.

A TIFAC official welcomed everyone and told them about the selection process for trainees, which is done through an all-India entrance examination that only people from India can take (55 centers in 45 cities).

During this event, Dr. Jitendra Singh also launched the TIFAC Mobile App. He told the public that through this App, people would be able to get all of the services of TIFAC with just a click.

IIT (BHU) researchers claim that ‘mosambi peels can prevent cancer and other fatal diseases.
According to IIT (BHU) researchers,’mosambi’ peels may be used to prevent cancer and other life-threatening
IIT Madras aims to become a technology hub driven by collaborating with industry and corporations
The Institute has raised around Rs. 200 crores for CSR projects from more than 140 of the world’s best-known
IIT Mandi Researcher team has studied non-invasive brain simulation techniques mathematically
Transcranial electrical stimulation (tES) is a way to stimulate the brain that doesn’t hurt. It sends an
IIT-Madras Team mimic natural processes to convert saline seawater into drinkable freshwater
A multinational team of scientists has pioneered a novel method of seawater treatment. They enhanced existing
IIIT-H takes on project Telugu Wiki to create Telugu content under “Project Indic Wiki.”
It’s called Project Indic Wiki, and it’s a goal of IIIT-H to make Wikipedia more useful in Indian languages
Researchers at IIT Madras have developed a motion planning algorithm that can think like a human
Researchers at the Indian Institute of Technology, Madras, have developed a new class of algorithms that are
Pradhan: IIT-Kharagpur should be at the forefront of innovation for the MSME sector
Minister Dharmendra Pradhan was speaking at the 67th Convocation of IIT Kharagpur, which is part of the
Scholarships for Women Education Promotion are announced by IHub-Data and IIIT-H
iHub-Data at IIIT Hyderabad gives scholarships to women who want to learn more about machine learning through