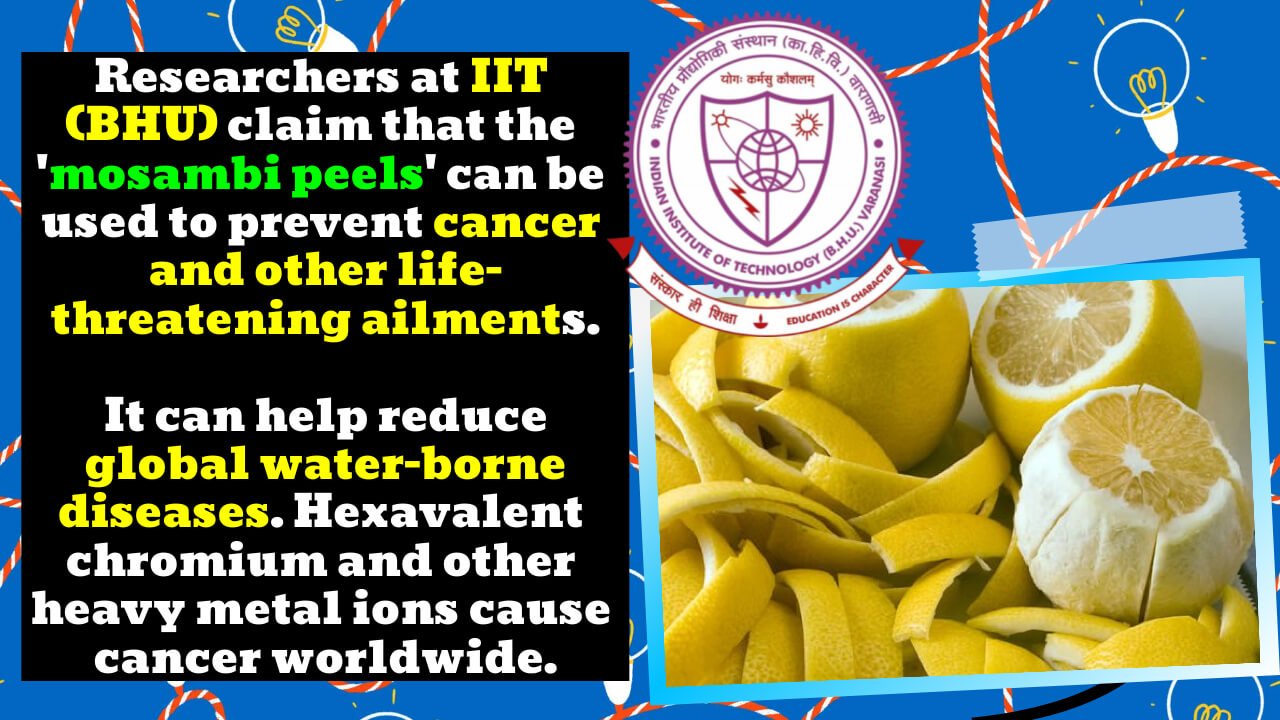 According to IIT (BHU) researchers,’mosambi’ peels may be used to prevent cancer and other life-threatening diseases. An environmentally friendly and cost-effective adsorbent can remove toxic heavy metal ions from contaminated water and wastewater.

Dr Mishra’s research focuses on developing a low-cost, environmentally friendly method for removing heavy metal ions from water. According to the WHO, 3.4 million people die each year due to water-related diseases. Each day, 4,000 children die as a result of drinking contaminated water.

A group of researchers at IIT (BHU) say that the peels of the “mosambi,” or Citrus limetta, can be used to fight cancer and other life-threatening illnesses. That’s not all: The researchers in the School of Biochemistry, IT (BHU) have made an eco-friendly and cheap adsorbent that can remove toxic heavy metals from water and wastewater, says Dr Vishal Mishra, associate professor in the School of Biochemical Engineering. The adsorbent can also be used to remove other harmful metals from water and wastewater. In the journal “Separation Science and Technology,” Dr. Mishra and his student, Veer Singh, have already written about this research.

There are a lot of water-borne diseases in countries that don’t have a lot of money. World Health Organization: Water-related diseases kill 3.4 million people each year. Most of them are children. According to a United Nations Children’s Fund (UNICEF) report, 4,000 children die each day because they drink contaminated water. 2.6 billion people don’t have clean water, killing 2.2 million people each year, 14 million of whom are children. Improved water quality can cut down on the number of water-borne diseases worldwide. Cancer caused by hexavalent chromium and other heavy metal ions is a big problem worldwide. According to a report from the Indian water resources ministry, a lot of people in the country drink water that is full of toxic heavy metals that could kill them. On the social and economic side, Dr. Mishra said that this research aims to find a cheap and environmentally friendly way to get rid of heavy metal ions from water. As fruit waste, citrus limetta peels are easy to find. This and chitosan can be used to make adsorbents that are cheap and environmentally friendly.

IIT Madras aims to become a technology hub driven by collaborating with industry and corporations
The Institute has raised around Rs. 200 crores for CSR projects from more than 140 of the world’s best-known
IIT Mandi Researcher team has studied non-invasive brain simulation techniques mathematically
Transcranial electrical stimulation (tES) is a way to stimulate the brain that doesn’t hurt. It sends an
IIT-Madras Team mimic natural processes to convert saline seawater into drinkable freshwater
A multinational team of scientists has pioneered a novel method of seawater treatment. They enhanced existing
IIIT-H takes on project Telugu Wiki to create Telugu content under “Project Indic Wiki.”
It’s called Project Indic Wiki, and it’s a goal of IIIT-H to make Wikipedia more useful in Indian languages
Researchers at IIT Madras have developed a motion planning algorithm that can think like a human
Researchers at the Indian Institute of Technology, Madras, have developed a new class of algorithms that are
Pradhan: IIT-Kharagpur should be at the forefront of innovation for the MSME sector
Minister Dharmendra Pradhan was speaking at the 67th Convocation of IIT Kharagpur, which is part of the
Scholarships for Women Education Promotion are announced by IHub-Data and IIIT-H
iHub-Data at IIIT Hyderabad gives scholarships to women who want to learn more about machine learning through
IIT-Roorkee took the top spot in the “Most Innovative Institutions” category by the CII.
The Indian Institute of Technology, Roorkee, takes first place in the CII’s “Most Innovative Institutions”