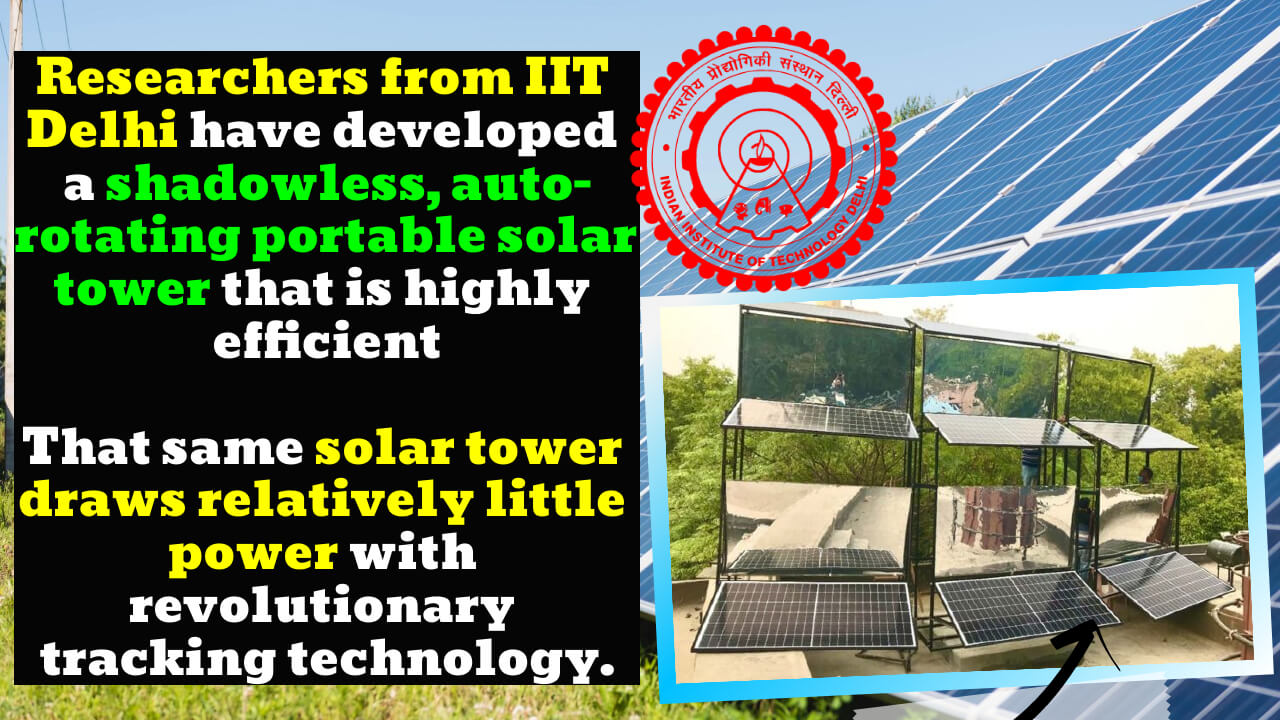 A high-efficiency, shadow-free, auto-rotating solar PV tower has been built by scientists at the Indian Institute of Technology in Delhi, India. This tower can generate electricity from solar panels in a given area all day long. Low-cost electro-mechanical systems can be used to rotate the solar tower horizontally. The solar PV tower with reflectors has one. The mirrors/reflectors used in this solution help solar panels get more sunlight all day long, from 8 am to 5 pm.

High-efficiency solar panels at the bottom don’t get blocked by the panels at the top. The tower rotates itself to produce power all day long in a given area, even when the sun doesn’t shine.

The space-saving ‘non-mechanical’ and mechanical tracking solar PV towers of 3kW and 5kW capacity, made by a team led by Physicist Prof. Dalip Singh Mehta, can be scaled up to more power with the concept of a solar tower array (green energy field).

These solar PV towers can be used for electric car charging stations, rooftop high-efficiency solar power generation for homes, schools, hospitals, shops, telecom towers, and more. Solar towers that can be mounted on the back of a car or truck can be used for agriculture (Agri-photovoltaics) like solar water pumps, solar battery charging for tractors, and more.

Both systems were patented by IIT Delhi and licensed to EP Sunsol Private Limited, which is based in Banglore and Mumbai. They can be used in commercial settings. EP Sunsol has already put the new systems in Chennai, Delhi, and Navi Mumbai. They have 3kW, 4kW, and 5kW systems, respectively.

After much research, we came up with a new way to mount solar PV towers and mirrors that follow the Sun’s movement. This new design is both light and cost-effective. According to Prof. Dalip Singh Mehta, the Physics Department, both non-mechanical and mechanical solar towers can produce 20% to 25% more power than traditional solutions while only taking up 50% to 60% of the roof space.

A solar tower that doesn’t move: Sunlight shines on solar panels and high-reflectivity mirrors that are vertically positioned in a way that allows them to be in the line of sight of it during the morning, midday, and evening hours. This leads to high-efficiency power generation from the Sun. People who use this method can make more power during non-peak Sun hours like 9 am to 11 am and 2 pm to 5 pm, and peak Sun hours from 11 pm to 2 pm, because the method allows them to be mounted in this way.

The mirrors/reflectors used in this solution help solar panels get more sunlight all day long, from 8 am to 5 pm. The solar irradiance on the solar panels has risen more than 50% so the power output will stay at 1000 W/m2 from 9 am to 4 pm. When solar panels are mounted in this way, they get a lot more sunlight between 9 am and 4 pm, giving them more power.

It has a low-cost electro-mechanical system that can be set up to rotate the solar tower horizontally. The mechanical tracking solar tower has reflectors on it. This way, the whole system with the panels and reflectors moves in the direction the Sun goes. A day starts facing east and ends facing west. The panels will be facing the East again to start a new day by the next morning. The new tracking system made by IIT Delhi doesn’t need any LDR sensors, needs only one-axis tracking, and draws very little power from the same solar tower.

Prof. Dalip Singh Mehta, Dr. Mayank Gupta, Mr. Virendra Kumar, Mr. Masood Ali, and Mr. Sanjay Ambwani were all part of the research team from IIT Delhi. The people who did the installation were Mahadevan R and Dr. Hitesh Mehta.

Students can prepare for competitive exams with the help of IIT-PAL, an interactive website by IIT Delhi
IIT-PAL is a project of the Ministry of Education that gives free video lectures to students in classes 11
IIT Bombay establishes India’s first National Centre of Excellence in Carbon Capture and Utilization
The Indian Institute of Technology Bombay has announced that it will start a new center called the National
IIT Hyderabad inaugurates 1,50,000-sq ft Technology Research Park to assist industry and academia collaborate
On February 5, the Indian Institute of Technology (IIT) Hyderabad opened a 1,50,000-square-foot Technology
Frugal manufacturing by IIT Madras leads the way to sustainable development
Frugal manufacturing can be very important to the growth of India because it will make it possible to make
A Centre Of Excellence For Renewable Energy Has Been Established At IIT Jodhpur
In IIT Jodhpur’s technology park, the center is a part of it. It is meant to help people doing research and
Jay Choudhry, an IIT BHU alumnus, donates $1 million to the Entrepreneurship Center
IIT BHU alum Jay Choudhry has given $1 million to the institute’s Entrepreneurship Center. Another goal of
Research at IIT Delhi could help hospitals select medical waste disposal companies
A group of researchers at IIT Delhi has come up with a way to help hospitals choose a good medical waste
SC-ST representation is inadequate in eight IITs, according to a recent report.
The Comptroller and Auditor General of India say that reserved groups’ insufficient representation in PG and