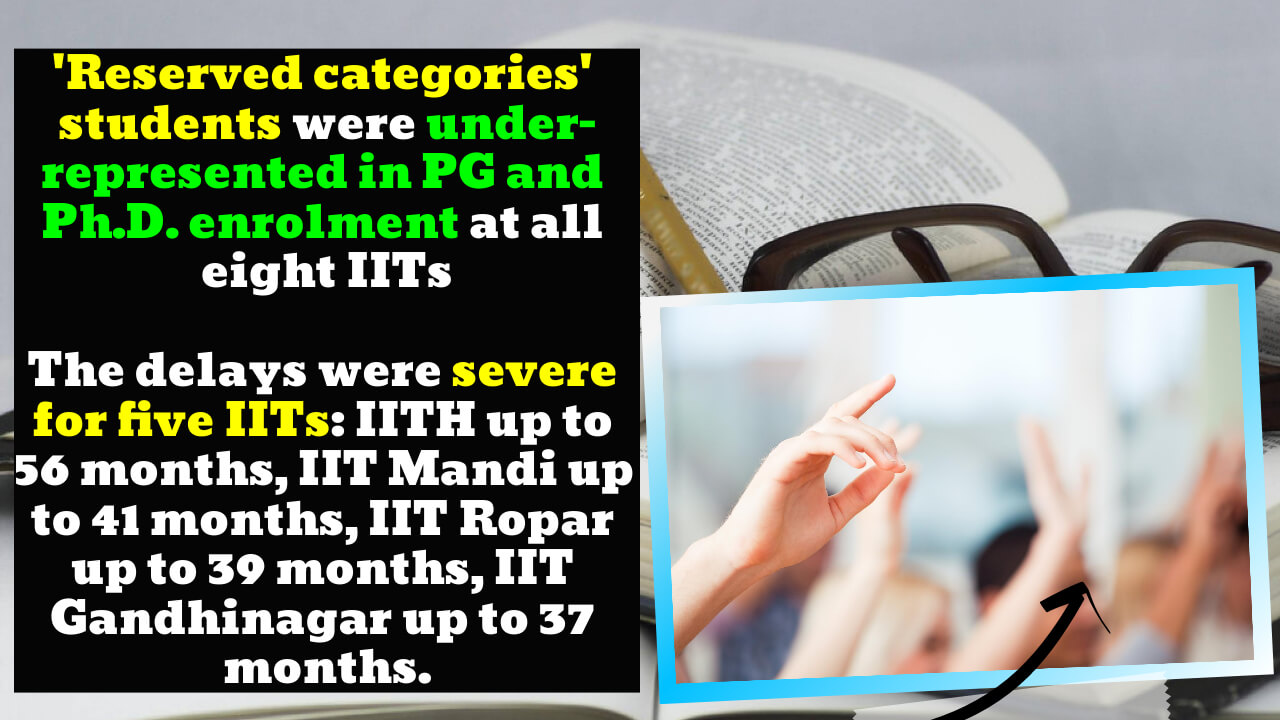 The Comptroller and Auditor General of India say that reserved groups’ insufficient representation in PG and Ph.D. enrolment at all eight IITs.

There was a shortfall of up to 69% in the number of students from the SC group at IIT Gandhinagar in PG courses. IITH took up to 56 months among the five IITs, and IIT Mandi took up to 41 months. It took three years for the IITH to use the Japan International Cooperation Agency (JICA) loan funds.

The Performance Audit (PA) was done in 2019-2020 to look at the eight new IITs that were built in 2008-09 in Bhubaneswar, Gandhinagar, Hyderabad, Indore, Jodhpur, Mandi, Patna, and Ropar. The goal was to see how well the new IITs were done. Based on the creation of infrastructure, purchasing of equipment and services, academic and research activities, governing, and oversight, the assessment was done to figure out how well the school was run and how well it was being run.

There was a shortfall of up to 69% in the number of students from the SC group at IIT Gandhinagar in PG courses. In PhD programs, the shortfall ranged from 25% in IIT Hyderabad, 75% in IIT Ropar, 66% in IIT Bhubaneswar, and 100% in IIT Jodhpur, for students from the ST group, as shown in the graph below.

The independent review looked at eight IITs that were set up in 2008 and 2009. It found that not meeting goals for infrastructure development hurt the number of students and the quality of their education at all eight IITs.

The report also says that four of the IITs still have problems getting and giving away land even after a decade. They are Bhubaneswar, Gandhinagar, Mandi, and Ropar. This was a big problem for making sure that the students had the things they needed.

The report says “Though the construction of academic buildings, hostels, laboratories, and so on was done in stages in all IITs from 2012, the pace of their construction did not match the pace of the anticipated growth in student and faculty numbers.” IITH took up to 56 months to get a license. IIT Mandi was up to 41 months late; the IIT Ropar was 39 months late; IIT Gandhinagar was 37 months late, and IITI took 37 months.

It was found that all eight IITs were still relying on the government to pay for their research because they didn’t get enough money from non-government sponsors.

In the IITH, there was a three-year delay in using funds from the Japan International Cooperation Agency (JICA), which meant that the intended goal of advancing academic and research activities on the Campus was not met, the PA report said.

The project didn’t meet its goals, which led to infrastructure development going on after the six-year project was over.

A report found that the “Ministry of Education had a target intake of 18,880 students in the first six years (2008-2014) across eight IITs.” It was found that only 6,224 students (33 percent) could get into all eight IITs during this time, which didn’t meet its goal of giving students as many educational opportunities as possible.

The report found that the governing bodies didn’t do enough to keep an eye on the construction and completion of the infrastructure, which led to long delays in student enrollment, the introduction of new courses, and the effective execution of research projects, among other things, as noted in the report.

IITs didn’t make sure the site was ready or figure out what else was needed, which led to long delays in getting the equipment, installing it, and commissioning it. This meant that students didn’t get all of the lab and research equipment they needed, making their learning less effective.

Using chest X-rays, researchers develop the Covid diagnosis technique at IIT Jodhpur
Science News An Artificial Intelligence-based chest X-Ray method has been used to screen for Covid-19A.
The IIT Guwahati Start-Up Lab will showcase drones during Republic Day in Assam
At this year’s Republic Day event, Drones Tech Lab, a drone start-up from IIT Guwahati, will show off their
IIT Guwahati Researchers have developed 3D-printed urban furniture from local industrial trash.
People in the building and construction industries are starting to use 3D printing to make concrete. IIT
IIT Mandi Researcher have discovered that the Himalayan Flower can inhibit the growth of COVID-19
The petals of ‘Himalayan Buransh’ (rhododendron arboreum) can stop the growth of COVID-19. Petals have been a
Researchers at IIT-Delhi have developed a method to minimize chemo side effects.
The technology makes the RBCs in the lab into smaller biocompatible vesicles. If you put a drug in the
IIT researchers suspect neotectonic activity was to blame for the collapse of the Konark Temple
Tectonic activity may have caused the 13th-century Konark Temple in Odisha to fall, say, researchers. It was
New directors were appointed to four IITs: IIT Delhi, IIT Madras, IIT Mandi, and IIT Indore
Biotechnologists at the only NIT in the state are working on a new, cheap, and effective way to treat
IIT-Jodhpur Researchers Develop Software Framework For Converting Digital Comics To Video
Indian researchers are making software that can convert comics into videos. An animated movie is made from a