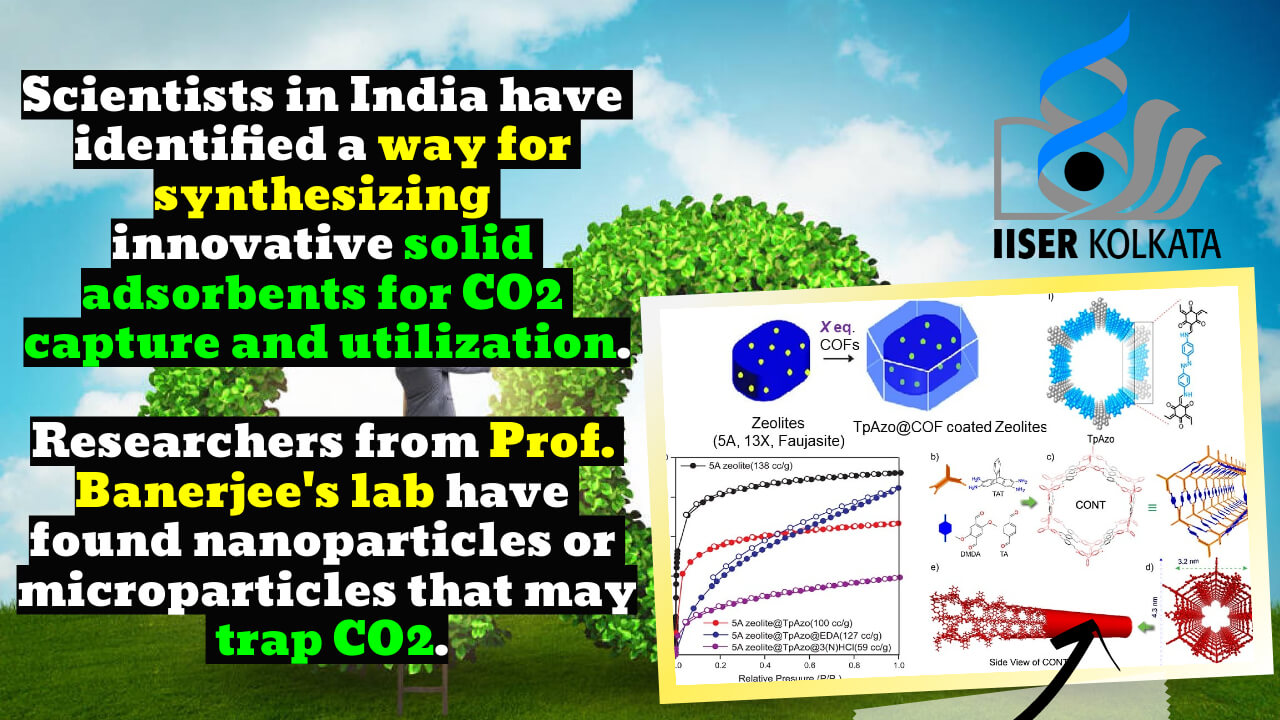 Indian scientists have found a way to make new solid adsorbents for CO2 capture and use. Among the new materials that have been made are porous Covalent organic frameworks, like COF-graphene Janus thin films, which have unique physical properties on their surfaces.

When zeolite was coated with a carbon-of-fertility (COF) layer, it kept the structure of the zeolite from being broken down by moisture, weak acids, and water. Because the COF-coated zeolites can take in a lot of CO2 even when they’ve been treated with weak acids, they’re good for industrial use.

Indian scientists have found a way to make new solid adsorbents that can be used to capture and use CO2.

Carbon capture and use are two new areas of research that are trying to cut down on CO2 emissions. Industrial advancements have already been made, but none of them can provide an economically viable and complete CO2 capture and use solution. So, research on new solid adsorbents could be very important for CO2 capture and CO2 use.

Professor Rahul Banerjee’s group at IISER-Kolkata, with help from the Indian government’s Department of Science and Technology, has shown how to make new solid adsorbents, especially for CO2 capture and CO2 use. It has been found that Prof. Banerjee’s group has found a special type of nanoparticle or microparticle that can trap CO2 in its micro and mesoporous voids.

The new materials with different physical properties on their surfaces that have been made include porous materials. It is possible to make covalent organic frameworks like COF-graphene Janus thin films, porous covalently bonded organic nanotubes, and COF-coated zeolite, all made of organic materials with a strong bond between them.

Two-dimensional graphene sheets were a good choice for the grafter because they helped the researchers design and make COF-graphene Janus thin films. This was done by the non-covalent interactions between COF and graphene, which made the Janus films flexible and porous at the DCM-water interface. The newly designed COF-coated zeolites could be a good choice for CO2 storage in the industry because they have a lot of surface area and are more stable.

The COF-coated zeolites can take in a lot of CO2, even if treated with weak acids. This makes them good for industrial use. Because of the COFs coating, the zeolite structure didn’t break down from moisture, weak acids, and water. Data for COF-coated zeolite at 1 bar, 293K shows that it can take in CO2 at the same rate as zeolite. This data is better than the CO2 uptake data for zeolite under the same conditions.

Rahul Banerjee’s group has recently found organic nanotubes (CONTs) with a structure that had never been found before. They used a new bottom-up method to find them. Because zero-dimensional covalent organic cages and two- and three-dimensional covalent organic frameworks were already known, the synthesis of one-dimensional organic nanotubes was previously unknown. The made-up carbon nanotubes (CNTs) aren’t as good as the made-up CONTs when it comes to functionalization, making them, and porosity, which has a BET surface area of 321 m2 g-1. They are also good candidates for CO2 adsorption because they can take in 60 to 80 cc g-1 of CO2 at 1 bar and 293 K. These CONTs can also be photosensitized, which means that when they are exposed to visible light, they can turn CO2 into CO (130-200 mol g-1 h-1) (400-700 nm).