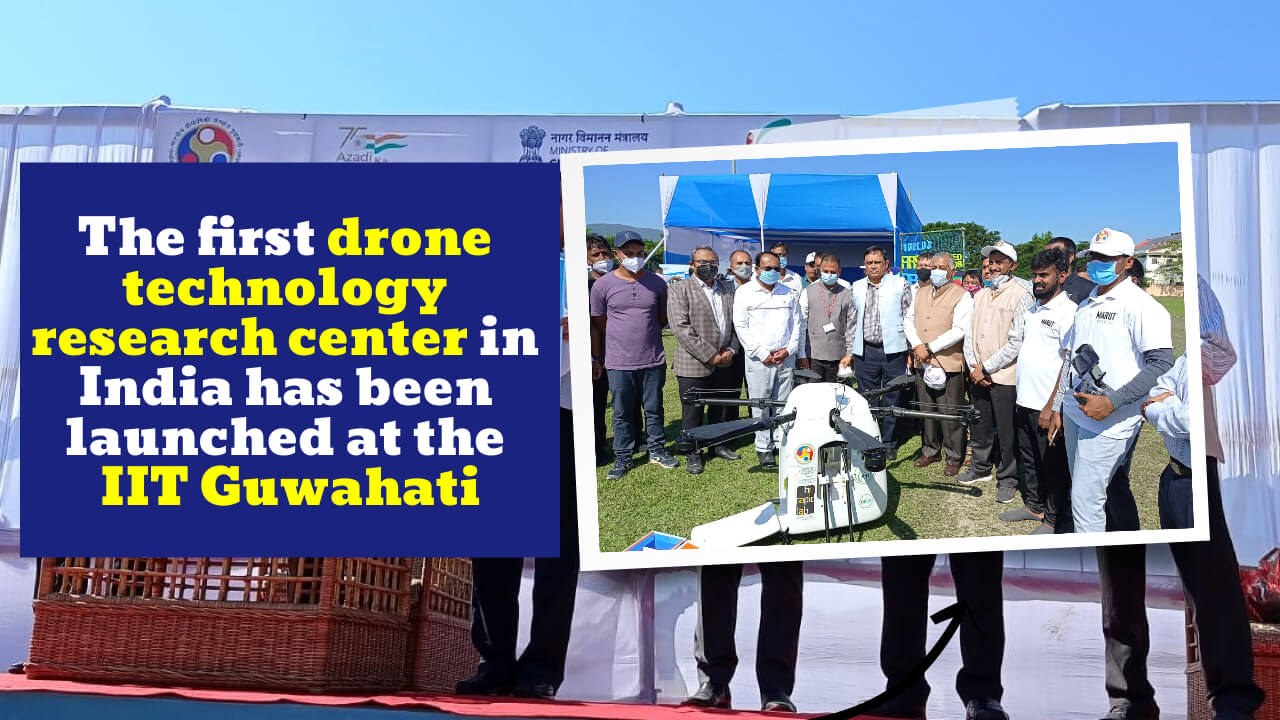 Technology-based on drones, skill development, a central administrative hub, and a drone port are all part of the IIT Guwahati campus. Civil Aviation Minister of State and retired general VK Singh were on hand to officially inaugurate the programs. Immediate/medical supplies and disaster relief items will be delivered using AXOM drone ports.

Center for Excellence in Research on Drone/UAV Technology and Artificial Intelligence; Skill development center for drone operation and maintenance; Nodal center for overall administrative data management of northeast region; “AXOMDroneports” are four initiatives by IIT Guwahati that are aimed at improving drone technology. AXOM drone ports will support cargo drones delivering urgent/medical and emergency supplies and precious supplies to remote areas of the North East, according to a statement from the Institute of Technology Guwahati (IT Guwahati).

IIT Guwahati and FICCI collaborated to put on the event. In a statement released by the Indian Institute of Technology Guwahati, the institute stated that the initiatives launched today would address a wide range of issues related to the development and implementation of drone technology, including technological advancements, training, legal aspects administrative management, logistics, and adoption.

“IIT Guwahati has taken the lead and made significant contributions in self-reliance (Atmanirbhar Bharat) in several sectors and has been focusing on various technology-based development projects for the benefit of the region,” said Professor TG Sitharam, Director of IIT Guwahati. Drone-assisted technology can bring remote and rugged terrains in the entire northeast region within reach in an emergency. Indian Institute of Technology Guwahati (IIT Guwahati) will share its expertise, impart skill development, establish a droneport, and provide all administrative support to realize the potential of India to become a global drone hub by 2030.”

Demonstration of our drones at Drone Utsav in @IITGuwahati https://t.co/AZDdqIAkmE

A data-driven way to improve road safety by IIT Madras is in use in over 32 states and union territories
An IIT Madras data-driven model is being used by 32 states and union territories in India. Ministry of
IIT Delhi Has Inaugurated 3 New Laboratories At Its Centre For Electric Vehicle Technologies
Indian Institute of Technology Delhi has opened three new electric vehicle laboratories at the institute. The
Two major learning and research centres have been established at IIT Kanpur
IIT Kanpur’s Shivani Centre for the Nurture and Re-Integration of Hindi and other Indian languages
A startup founded by IIIT-Hyderabad alumni receives $69 million in funding
Investment group GEM Global Yield LLC has invested $69 million in BlueSemi. In less than 60 seconds, the
Keeping up with the times, IITs accept stock donations from alumni
Indian Institute of Technology, Delhi alumni, has contributed $1 million in business stock to the school.
IITs and ICMR have partnered for Make-in-India product development and commercialization
The Indian Institutes of Technology (IITs) and the Indian Council of Medical Research (ICMR) have formed
IIT Bombay is India’s top university, ranking 42 in QS Asia University Rankings 2022
Today, Quacquarelli Symonds issued the 2022 QS Asia University Rankings. IIT Bombay earned a score of 71 out
Labs at IIT Indore will be virtually accessible to students of other institutions
Thanks to the institute, students from other academic institutions will be able to use IIT Indore’s modern