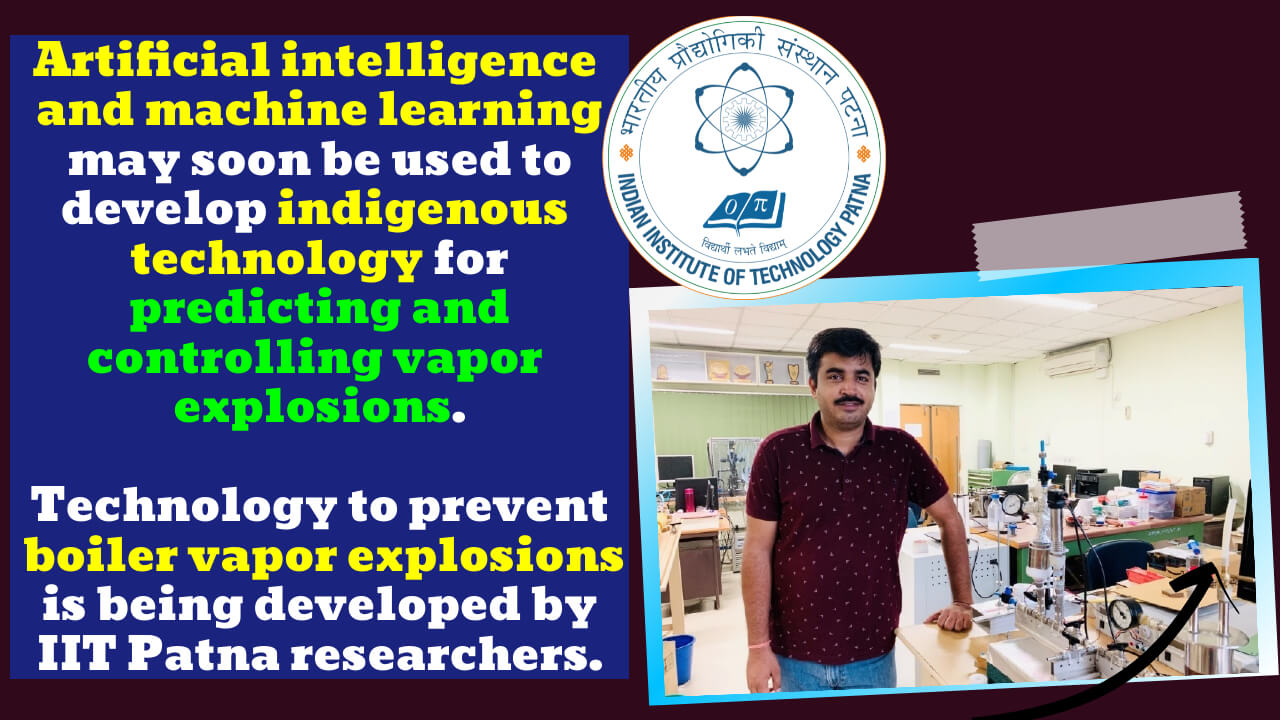 Artificial Intelligence and machine learning may soon be used to make new technology for predicting and controlling accidents caused by vapor explosions in boilers.

Over the past 10 years, there have been 23,000 boiler accidents worldwide, with India accounting for 34% of all deaths. A single acoustic sensor will be used to make a tool that can predict boiling regimes before they happen. Such a tool could then be used to prevent accidents caused by vapor explosions in industrial boilers.

People may soon be able to make their technology for predicting and controlling vapor explosions in boilers, which could help prevent accidents like the one in Muzaffarpur, Bihar.

Twenty-three thousand boiler accidents have happened worldwide in the last 10 years, with India alone accounting for 34% of deaths.

Rishi Raj, an Associate Professor in the Department of Mechanical Engineering at IIT Patna and a recipient of this year’s Swarnajayanti fellowship from the Department of Science and Technology (DST), is working on a new technology that uses Artificial Intelligence and Machine Learning to help predict and control vapor explosions in boilers before they happen. This new technology will help prevent accidents before they happen.

These boilers are used in important industrial and strategic applications. This technology for online monitoring and control of the boiling process will help improve these boilers’ health, efficiency, and economy. Bridges the gap between what we know about bubble dynamics when they’re on a heated surface and how boiling works in large-scale systems used in chemical and other applications.

Recently, Prof. Raj found that the acoustic fingerprint of bubbles could be used to decipher the science of Boiling. You can get a two-dimensional map of the actual three-dimensional boiling process using thermal and optical methods. On the other hand, Boiling gives a lot of statistically and temporally detailed information about the movement of bubbles in the water. As a result, his research group has developed an acoustic emission-based deep learning framework that can predict when a boiling crisis will happen to avoid thermal runaway-caused failures in boiling-based systems. Boiling crises, which are very vigorous boils or bubbles that form quickly, can be very dangerous for applications because they can quickly rise in pressure and temperature.

Professor Raj now says that with the help of the Swarnajayanti fellowship, he will see bubble behavior in terms of size, number density, and frequency of bubble formation. He will also use sound and thermal (temperature) data to get to the root of the problem and explain its physics.

In the end, the goal is to figure out which bubble activity features are most important to make a physics-based tool that can predict the boiling regimes before they happen with a single acoustic sensor (hydrophone). Such a tool could then be used to prevent vapor explosions in industrial boilers before they happen.

In this case, he wants to show how a feedback control strategy can be used to start auxiliary cooling units in an existing 30 kW fire-tube boiler at IIT Patna. This way, he wants to avoid a dangerous thermal runaway. There will be more demonstrations, including one that will show how to completely stop the sudden temperature rise (thermal runaway) that happens during a boiling crisis in space-based zero-gravity situations and how to make smart thermal management solutions for miniaturized electronic devices. Sudden and large rises in temperature usually cause pressure to rise or metal parts to meltdown, which can cause leaks and explosions.

Because of this project, we hope to learn more about how Boiling works and how to keep boilers in good shape. In addition, we hope to speed up the use of modern prognostics and health management tools in existing boilers. In this way, safety will be better thanks to the modernization of boilers, and productivity will be better because there will be less downtime, and energy and water resources will be used efficiently.

IIT Kanpur professor says that COVID-19 third wave likely to end in April
IIT Kanpur’s professor says that the third wave of the COVID-19 pandemic will be even worse than the first
Vivek Vaidya, an alumni of the IIT Delhi, will donate Rs 10 crores to the Institute’s endowment fund
Vivek Vaidya, an IIT Delhi alumni, would donate Rs 10 crores to the Institute’s endowment fund. Vivek Vaidya
IITs failed to attract enough research projects, or higher research students: CAG report
All eight IITs failed to attract enough non-government-funded research projects or acquire land for student
Faculty positions at seven IITs are vacant in a range of 5-36%: CAG report
There were vacancies in faculty positions in seven IITs that ranged from 5% to 36%. According to a CAG
Atal rankings for innovation rank IIT-M, IIT-B, and IIT-D as the top three
This year, 1438 Institutes are taking part, almost double the number from the last time. IITs took the lead
Suzuki, Japan, has Joined IIT-H for its Autonomous Vehicle Innovation Center
Suzuki Corporation of Japan has decided to set up its Innovation Center at IIT-H. This will be the first one
IIT Madras researchers reveal the critical role of oxygen stoichiometry in water splitting
Producing hydrogen as an energy source could meet most global energy demands. Much research has gone into
Japanese AI research institute and IIT Hyderabad has renewed their MoU for AI research
The Indian Institute of Technology (IIT) Hyderabad and Japan’s National Institute of Advanced Industrial