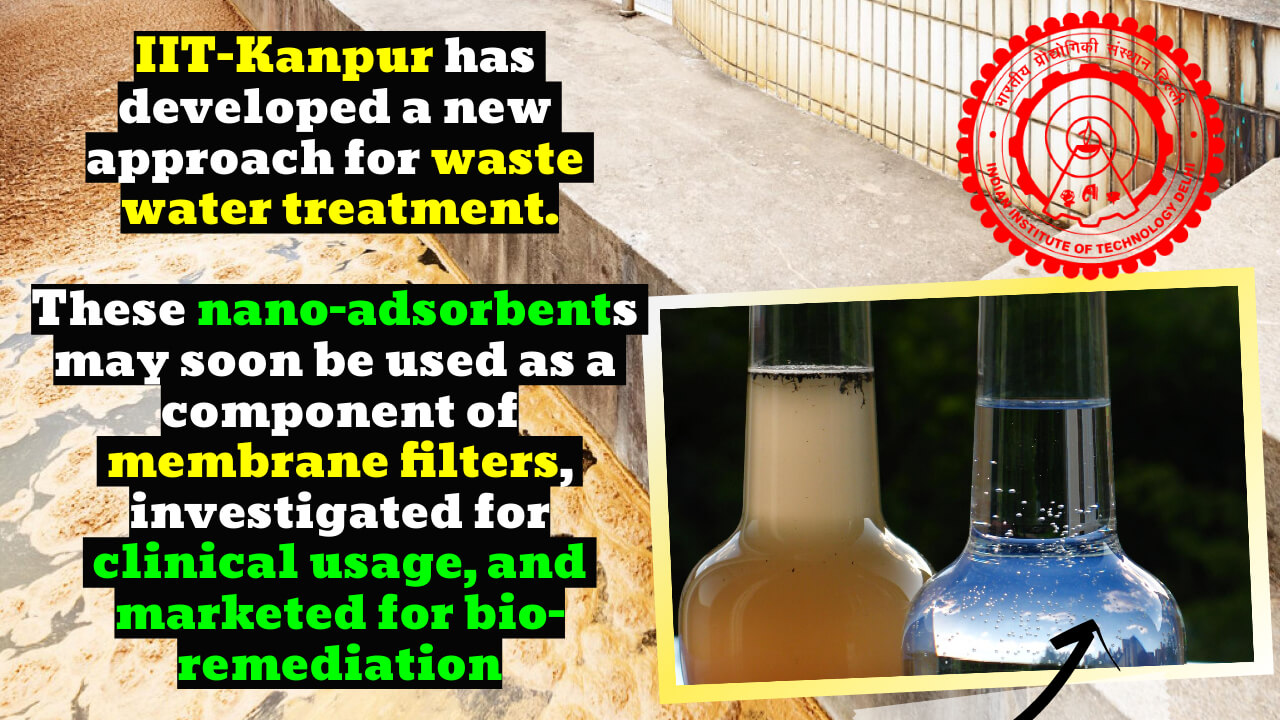 Using the uniform cubical nano-adsorbent is good for the environment because it can be used again. It is also bactericidal and has a lot of different layers.

It would make it easier to remove antibiotic-resistant and metal-resistant bacteria from water that other bacteria have contaminated. The new technology can be used to clean up water pollution and other health problems.

The IIT-Kanpur has made a new nano-adsorbent that can be used to clean up wastewater.

This nano-adsorbent could be used to remove antibiotic-resistant and metal-resistant bacteria from polluted water simply and quickly.

In the department of Mechanical Engineering, Dr. Archana Raichur and Dr. Niraj Sinha worked on the project.

The uniform cubical nano-adsorbent is eco-friendly, reusable, bactericidal, and multi-layered. It will help remove harmful bacteria from water by removing them one at a time.

It’s a big change from the way nano-adsorbents are made now. They’ve been used to clean up polluted water and improve the health of people who live near water.

Prof. Abhay Karandikar, the Director of IIT-K, said: “Water pollution is one of the many environmental problems that the world is facing right now.” In the end, it directly affects the health of both people and animals. At IIT-Kanpur, we do a lot of research in nanotechnology, and this invention is proof of that fact. This important invention in the form of these new nano-adsorbents would stop water pollution, but it would also be a huge help to humanity.

According to Raichur, the water contaminated by drugs and medicines is getting more common now.

In addition to water pollution, Antimicrobial Resistance (AMR) is a big public health problem that could make it hard to treat bacterial infections.

Antibiotic-resistant bacteria can spread in both community and hospital settings.

At IIT-Kanpur, they made nano adsorbents with special physical and chemical properties. They can kill and separate bacteria resistant to antibiotics from water.

Sinha said that the new technology could be used to improve water filtration and remove pathogens and bacteria from drinking water. Because it doesn’t have any side effects and is safe for the human body, it can be used to fight off microorganisms.

New brain center at IIT Madras aims to become a global center for neuro-research
The Indian Institute of Technology (IIT) Madras will set up a brain research center, and it’s going to do
IIT Madras researchers have developed an innovative way to obtain high-definition ultrasound images
With ultrasound imaging, people can get real-time images inside their bodies, which uses sound waves to look
IIT Madras and IIT Madras Research Park to host IAS officers, professors, and entrepreneurs
The Symposium is being organized to bring together pioneering brains from academia, government, and business.
Robots for the disabled are being developed by IIT Madras and a motion technology company
Indian Institute of Technology Madras (IIT Madras) is working with Portescap, a motion technology company,
5,000 students from across India will participate in the IIT Madras Entrepreneurship Summit 2022
The annual Entrepreneurship Summit will be held from March 3 to 6. The online summit will serve over 800
AI-powered search engine for policing and crime mapping developed by IIT Kanpur startup
A group called AIIDE, which stands for Artificial Intelligence and Innovation-Driven Entrepreneurship, is
Biodegradable nanoparticles developed by the IIT Kanpur protect crops from disease
IIT Kanpur researchers have discovered a biodegradable nanoparticle that can be used as an alternative to
Researchers at IIT Mandi use biofuel precursors made from orange peel hydrochar
It can be used as a catalyst to make biofuel precursors from chemicals found in plants and trees. Hydrochar