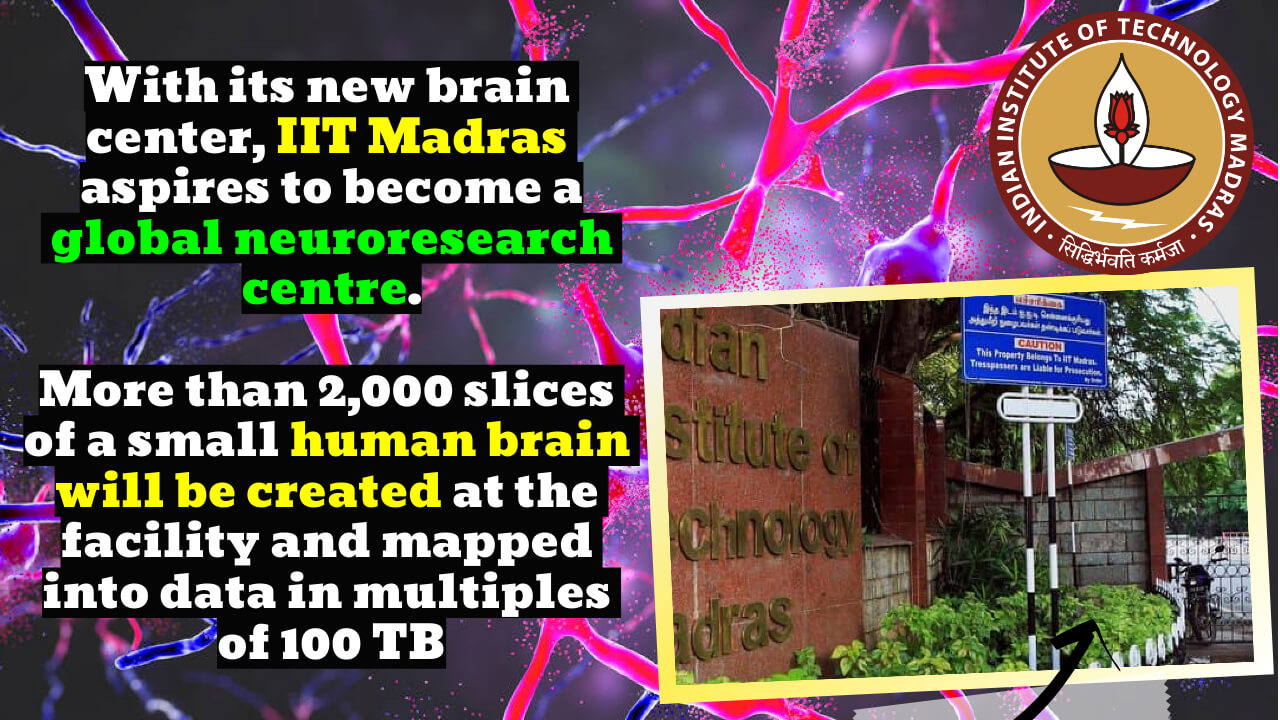 The Indian Institute of Technology (IIT) Madras will set up a brain research center, and it’s going to do that. The goal is to make the most detailed map of the human brain possible with the help of technology.

The center will also help IIT Madras with future brain-related research projects. BrainSightAI, a startup company in India, is working on using functional MRI (fMRI) data to make virtual or digital maps of the human brain. This is an early project. The digital twin can be used to learn more about how electrical impulses can help treat neurological conditions like schizophrenia.

India’s Indian Institute of Technology (IIT) Madras will set up a brain research center on campus. This center will use engineering and technology to make the highest-resolution map of the human brain and help with other brain-related research projects.

It’s called “Computational and Experimental Platform for High-Resolution Terapixel Imaging of Ex-vivo Human Brain Cells.” Mohanasankar Sivaprakasam, who already runs the Healthcare Technology Innovation Center at IIT Madras, will also run this new center. According to Sivaprakasam, the first goal of the new brain research center is to build the first layer of high-resolution images of the human brain that are driven by technology.

In this project, we want to make an atlas of the cells and connections in the brain. It is the most complicated part of the body, with tens of billions of cells connected in a very complicated way. Today, we can use magnetic resonance imaging (MRI) to see what’s inside the human brain. “However,” Sivaprakasam said, MRI-based brain reconstruction is done at a millimeter level, which means that the data is “rough.”

When K. Vijay Raghavan, the Indian government’s main scientific advisor, saw the proposal, he sent it to the government. During a meeting in February 2020, he agreed to set up a brain research center at IIT Madras.

Brain research projects have been getting more and more help from technology-based platforms. BrainSightAI, an early-stage Indian startup, is using functional MRI (fMRI) data to make virtual or digital maps of the human brain using Dassault Systemes’ augmented technology platform. Then, the digital twin can be used to understand how electrical impulses can help treat neurological conditions like schizophrenia.

These technologies are also being used in neurological research by the Indian National Institute of Mental Health and Neurosciences (Nimhans).

There will be a facility that will make more than 2,000 parts of a small human brain, which will be mapped into more than 100 TB of data. A lot of data is run through a high-performance computing platform to make brain atlas for research. The brains of three people have already been passed through our center. Universities around the world now use it, “Sivaprakasam said.” About 15 researchers from Europe, the US, South Africa, and Japan also use it.

As time goes on, the center will be used by people of all kinds, including students and businesses in the medical and pharmaceutical fields. : They’ll be working with the center to start new research projects on neurological disorders.

IIT Madras researchers have developed an innovative way to obtain high-definition ultrasound images
With ultrasound imaging, people can get real-time images inside their bodies, which uses sound waves to look
IIT Madras and IIT Madras Research Park to host IAS officers, professors, and entrepreneurs
The Symposium is being organized to bring together pioneering brains from academia, government, and business.
Robots for the disabled are being developed by IIT Madras and a motion technology company
Indian Institute of Technology Madras (IIT Madras) is working with Portescap, a motion technology company,
5,000 students from across India will participate in the IIT Madras Entrepreneurship Summit 2022
The annual Entrepreneurship Summit will be held from March 3 to 6. The online summit will serve over 800
AI-powered search engine for policing and crime mapping developed by IIT Kanpur startup
A group called AIIDE, which stands for Artificial Intelligence and Innovation-Driven Entrepreneurship, is
Biodegradable nanoparticles developed by the IIT Kanpur protect crops from disease
IIT Kanpur researchers have discovered a biodegradable nanoparticle that can be used as an alternative to
Researchers at IIT Mandi use biofuel precursors made from orange peel hydrochar
It can be used as a catalyst to make biofuel precursors from chemicals found in plants and trees. Hydrochar
The first indigenous 5G technology has been developed by IIT-Hyderabad.
Researchers from the Indian Institute of Technology, Hyderabad (IIT-H) and Wisig Networks developed the