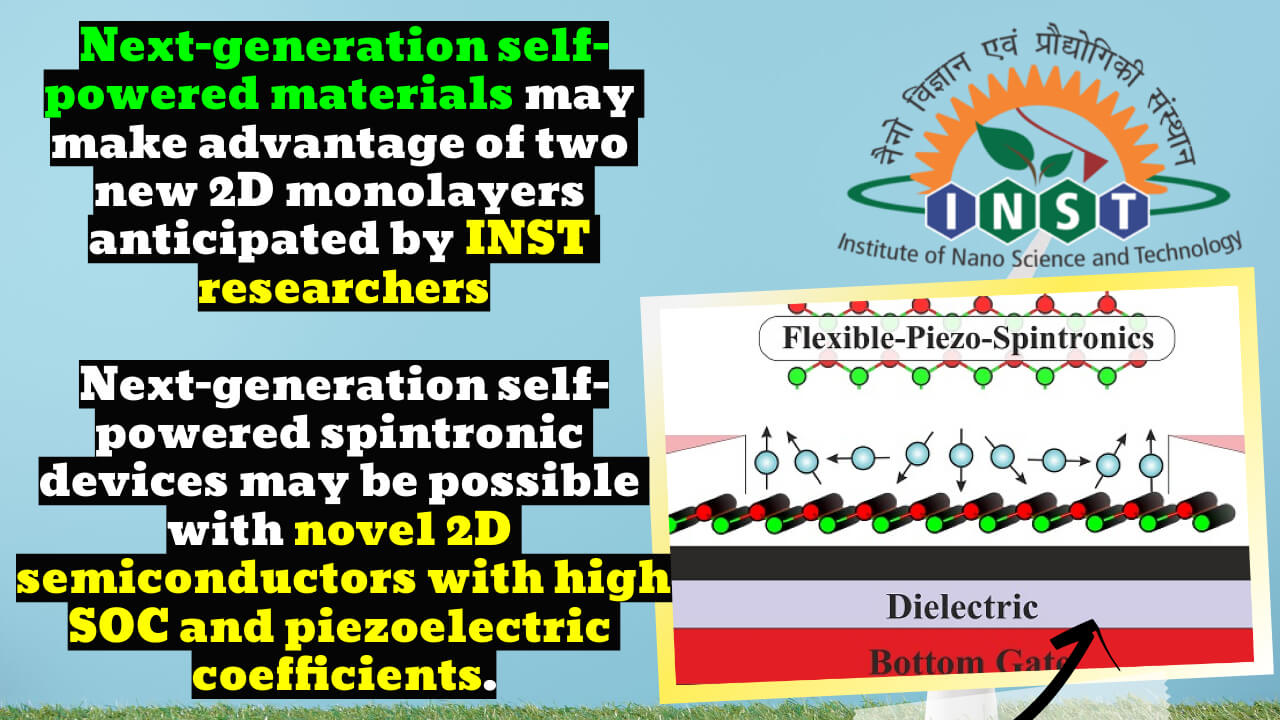 Indian scientists have come up with two very interesting two-dimensional monolayers that could be used in the next generation of self-powered materials. Electrons have another freedom, which is the ability to spin.

It’s called spintronics, and it makes use of the spin of electrons to get and store information that leads to the next generation of data storage devices. Next-generation spintronic devices must use very little power and be able to control the spin orientation very precisely. Self-powered devices will add extra benefits. CSIR, a government agency in India, funded the research. ZnTe and CdTe monolayers were thought to be possible.

A group of Indian scientists has used computer simulations to predict two interesting 2D monolayers that could be used in the next generation of self-powered materials that generate spin currents when they are stretched.

In addition to having a charge, electrons also have another freedom: their spin. Spin degrees of freedom (spin up and spin down) are built into an electron and are easier to manipulate in the presence of a magnetic field than the movement of the electron charge. Using the spin degree of freedom in new materials to store a lot of data quickly can be the best and fastest way to do this for a long time. This could pave the way for new high-speed quantum information devices. It’s called spintronics, and it makes use of the spin of electrons to get and store information that leads to the next generation of data storage devices. Magnetic sensor applications and theoretical predictions can help experimentalists and technologists make new materials that use these properties.

Abir De Sarkar, a professor at the Institute of Nano Science and Technology in Mohali, India, developed a new class of stable, hexagonal, buckled ZnX monolayers. These monolayers are made of Zn, a metal, and X is either S, Se, or Te. All of these have strong spin-orbit coupling. ZnTe and its isoelectronic partner, CdTe, are two of them.

This is because CdTe and ZnTe monolayers are piezoelectric. When strain is put on them, a large voltage can be created, replacing the need for an external voltage source. Self-Powered Flexible-Piezo-Spintronic Devices that combine piezoelectricity, low mechanical stiffness, and momentum-dependent splitting of spin bands are the next generation of these devices, which were previously thought of for one-dimensional ZnO nanowires. This idea has been applied to 2D semiconductors by the current team in a way that makes sense.

The INST team made ZnTe and CdTe monolayers from the bulk structures that had been made before but with a different pattern. As well as having a strong spin-orbit coupling (SOC), these semiconductors are also very flexible. Because of their amazing results, these monolayers could be used in the next generation of self-powered flexible-piezo-spintronic devices.

There has never been a report of 2D semiconductors with spin-orbit coupling, piezoelectricity, and flexibility all at the same time. The wide bandgap allows for many changes in its electronic properties to be made by things that happen outside of it.

Next-generation spintronic devices must use very little power and be able to control the spin orientation very precisely. Self-powered devices will add extra benefits. In this way, the properties of semiconductors play a big role in the development of new technologies or in making old ones better. 2D semiconductors with high piezoelectric coefficients and strong SOC can lead to new ways to make self-powered spintronics devices of the future, like the ones shown in this video. CSIR, India, and the DST–INSPIRE grant funded this research, predicting that the ZnTe and CdTe monolayers will be flexible, piezoelectric, and have a tunable giant momentum-dependent splitting of spin bands, all of which are very new (Rashba properties).

Prof. De Sarkar said, “Our computational findings are expected to encourage experimentalists to make nano-devices that have the functionality they want.”

IIT-Kanpur has developed a new approach for wastewater treatment
Using the uniform cubical nano-adsorbent is good for the environment because it can be used again. It is also
New brain center at IIT Madras aims to become a global center for neuro-research
The Indian Institute of Technology (IIT) Madras will set up a brain research center, and it’s going to do
IIT Madras researchers have developed an innovative way to obtain high-definition ultrasound images
With ultrasound imaging, people can get real-time images inside their bodies, which uses sound waves to look
IIT Madras and IIT Madras Research Park to host IAS officers, professors, and entrepreneurs
The Symposium is being organized to bring together pioneering brains from academia, government, and business.
Robots for the disabled are being developed by IIT Madras and a motion technology company
Indian Institute of Technology Madras (IIT Madras) is working with Portescap, a motion technology company,
5,000 students from across India will participate in the IIT Madras Entrepreneurship Summit 2022
The annual Entrepreneurship Summit will be held from March 3 to 6. The online summit will serve over 800
AI-powered search engine for policing and crime mapping developed by IIT Kanpur startup
A group called AIIDE, which stands for Artificial Intelligence and Innovation-Driven Entrepreneurship, is
Biodegradable nanoparticles developed by the IIT Kanpur protect crops from disease
IIT Kanpur researchers have discovered a biodegradable nanoparticle that can be used as an alternative to