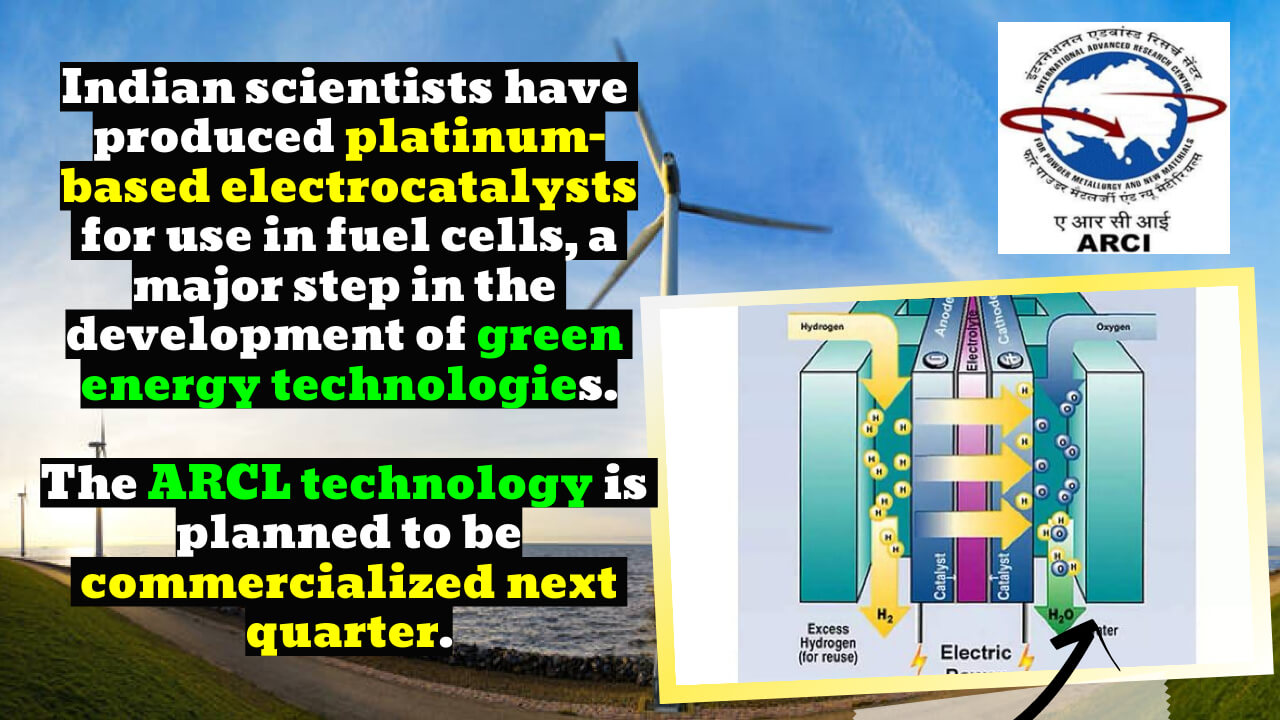 Indian scientists have made platinum-based electrocatalysts that can be used in fuel cells. Fuel cells are devices that use energy to make DC electricity from hydrogen, and they also make water as a byproduct. The main problem is that it costs a lot to get parts from other countries.

Indian scientists have taken a huge step forward in developing green energy technology. They have made platinum-based electrocatalysts for use in fuel cells at home. The electrocatalyst that was made had similar properties to the commercially available electrocatalyst in terms of how well it worked in fuel cells, how well it resisted corrosion, and how long it could last in fuel cell stacks. Fuel cells are devices that convert energy from hydrogen into DC electricity and make water as a byproduct. They can be used for transportation, material handling, emergency backup power, and many other things.

Even though electrocatalyst technology has a lot of benefits for green energy production, the main problem is that it costs a lot to bring in parts from other countries. One of the most important parts of the platinum-based electrocatalyst is that it helps the fuel cell last longer and cuts down costs.

ARCI is an independent research center run by the department of science and technology, and the work done by its scientists has been published in the “International Journal of Hydrogen Energy.” A patent has also been filed, the department said in a statement.

Raman Vedarajan, one of the people who came up with the technology, thinks this is important because it will help make “Made in India” durable polymer electrolyte membrane fuel cell stacks.

IIT-Kanpur has developed a new approach for wastewater treatment
Using the uniform cubical nano-adsorbent is good for the environment because it can be used again. It is also
New brain center at IIT Madras aims to become a global center for neuro-research
The Indian Institute of Technology (IIT) Madras will set up a brain research center, and it’s going to do
IIT Madras researchers have developed an innovative way to obtain high-definition ultrasound images
With ultrasound imaging, people can get real-time images inside their bodies, which uses sound waves to look
IIT Madras and IIT Madras Research Park to host IAS officers, professors, and entrepreneurs
The Symposium is being organized to bring together pioneering brains from academia, government, and business.
Robots for the disabled are being developed by IIT Madras and a motion technology company
Indian Institute of Technology Madras (IIT Madras) is working with Portescap, a motion technology company,
5,000 students from across India will participate in the IIT Madras Entrepreneurship Summit 2022
The annual Entrepreneurship Summit will be held from March 3 to 6. The online summit will serve over 800
AI-powered search engine for policing and crime mapping developed by IIT Kanpur startup
A group called AIIDE, which stands for Artificial Intelligence and Innovation-Driven Entrepreneurship, is
Biodegradable nanoparticles developed by the IIT Kanpur protect crops from disease
IIT Kanpur researchers have discovered a biodegradable nanoparticle that can be used as an alternative to