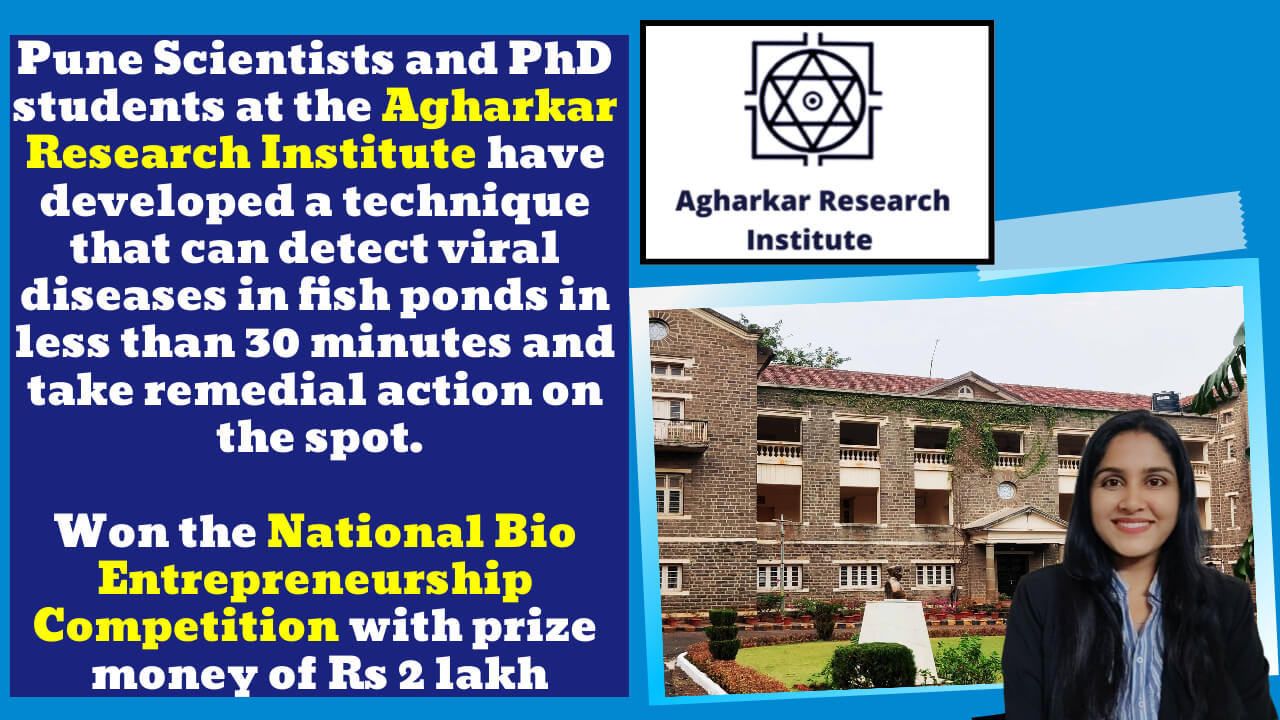 This new method was developed at the Agharkar Research Institute (ARI). Scientists and Ph.D. students there have made it so that it can be used right away to find out what is going on on the spot in under 30 minutes. He won the National Bio Entrepreneurship Competition because of the new technology he came up with.

Pune Scientists and Ph.D. students at the Agharkar Research Institute (ARI) in India have developed a new way to detect viral diseases in fish ponds on the spot and take steps to prevent them. This could be a game-changer for farmers who want to keep their fish ponds healthy.

It would send text messages to nearby farmers, government agencies, and other people who might be at risk. An award has been given to Ph.D. student Snehal Jamalpure by the National Bio Entrepreneurship Competition because of the new technology he came up with.

Snehal and her team, led by scientists Kishore Paknikar and Jyutika Rajwade, have found a way to find viral diseases that affect the aquaculture industry. This is called “Matsya Suraksha.” She was one of the 46 finalists judged on their uniqueness, scalability, and business potential.

There is a reason why Snehal said this: “It costs a lot of money on a global level because of viral diseases that can cost billions of dollars. Farmers can use Matsya-Suraksha to find out if their fish are infected on the spot in less than 30 minutes, and it will help them figure out what to do about it. The paper-based biosensor has specific recognition elements like antibodies, peptides, and so on, and gold nanoparticles as a label to show how the diagnostic worked. These procedures for bio-sensing and detecting viral pathogens have been set up in the lab at ARI before.”

Mrs. Snehal Jamalpure-Lakka, a PhD student from ARI, won the National Bio Entrepreneurship Competition with prize money of Rs 2 lakh. Mrs. Snehal Jamalpure- Lakka was among the 46 finalists, who were rated on uniqueness, scalability, and business potential factors. pic.twitter.com/obc4YGxGXf

Vivek Vaidya, an alumni of the IIT Delhi, will donate Rs 10 crores to the Institute’s endowment fund
Vivek Vaidya, an IIT Delhi alumni, would donate Rs 10 crores to the Institute’s endowment fund. Vivek Vaidya
IITs failed to attract enough research projects, or higher research students: CAG report
All eight IITs failed to attract enough non-government-funded research projects or acquire land for student
Faculty positions at seven IITs are vacant in a range of 5-36%: CAG report
There were vacancies in faculty positions in seven IITs that ranged from 5% to 36%. According to a CAG
Atal rankings for innovation rank IIT-M, IIT-B, and IIT-D as the top three
This year, 1438 Institutes are taking part, almost double the number from the last time. IITs took the lead
Suzuki, Japan, has Joined IIT-H for its Autonomous Vehicle Innovation Center
Suzuki Corporation of Japan has decided to set up its Innovation Center at IIT-H. This will be the first one
IIT Madras researchers reveal the critical role of oxygen stoichiometry in water splitting
Producing hydrogen as an energy source could meet most global energy demands. Much research has gone into
Japanese AI research institute and IIT Hyderabad has renewed their MoU for AI research
The Indian Institute of Technology (IIT) Hyderabad and Japan’s National Institute of Advanced Industrial
IIT Delhi and IIIT Delhi had invited professors to collaborate on research
A joint project between IIT Delhi and IIIT Delhi that faculty members from both schools were asked to work on