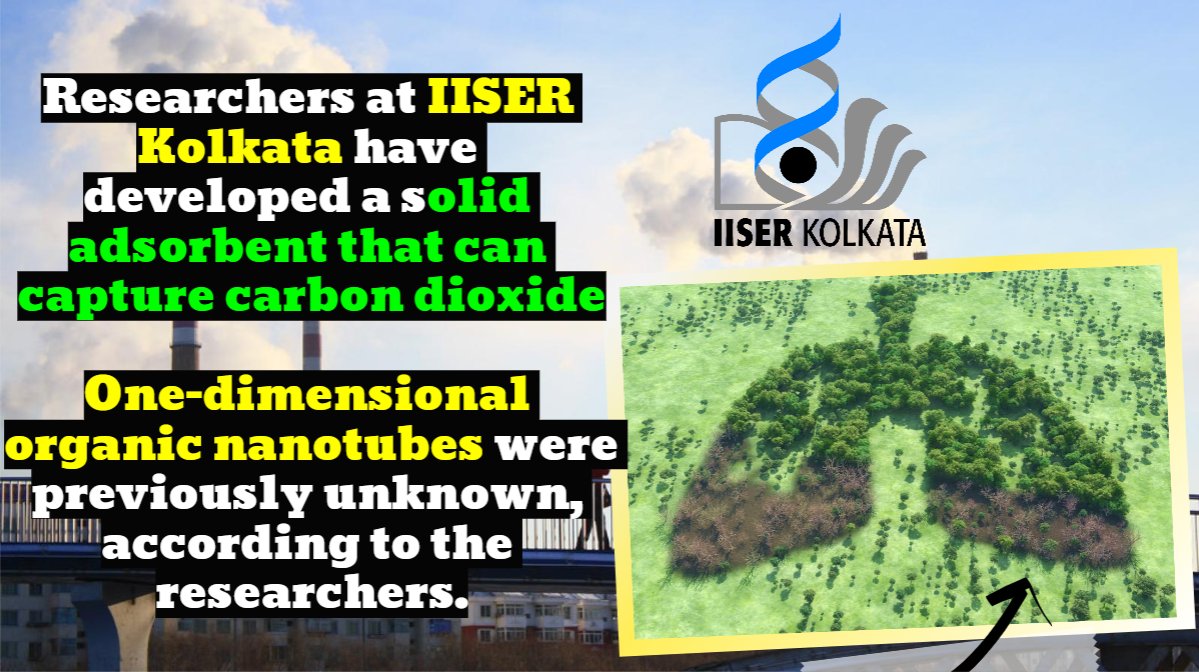 Carbon capture and use are two new research fields becoming more popular. They are both focused on cutting down on carbon dioxide emissions. Porous COFs and COF-graphene Janus thin films are two new materials that have been made.

They have different physical properties on their surfaces. One-dimensional organic nanotubes had never been seen before. The COF-coated zeolites are good for industrial use because they can take in a lot of carbon dioxide. Last year, Prime Minister Narendra Modi said that India wants to cut carbon emissions by 1 billion tons by the end of the decade. This goal is a goal that India has set for itself.

Researchers at the Indian Institute of Science Education and Research in Kolkata, with help from the government of India, showed how to make new solid adsorbents, especially ones that can be used to capture and use carbon dioxide from the air. Prof. Rahul Banerjee led a group of scientists who found special nanoparticles or microparticles that can trap CO2 in their small and medium-sized voids. Carbon capture and use are two new research fields becoming more popular. They are both focused on cutting down on carbon dioxide emissions. Even though a lot of industrial progress has been made by many different people, none of them has been economically viable and complete when it comes to capturing and using carbon dioxide. The group said their research on solid absorbents might be a good material for capturing CO2. Covalent Organic Frameworks (COF) are new materials with unique physical properties on their surfaces. Some of these new materials are COF-graphene Janus thin films, porous covalent bonded organic nanotubes, and COF-coated zeolite.

As grafters, 2D graphene sheets helped scientists design and make COF-graphene Janus thin films by forming non-covalent bonds between COF and graphene. This made flexible porous Janus films that stayed in place when they came into contact with water. The researchers said that the new COF-coated zeolites could be great for storing carbon dioxide in the industry because they have a lot of surface area and are more stable. The COF-coated zeolites can take in a lot of carbon dioxide even after being treated with weak acids. This makes them good for industrial use. Coating the zeolite structure with COF prevented it from being damaged by water, weak acids, and other things that could get into it. A new bottom-up approach led to the discovery of purely covalently bonded organic nanotubes (CONTS) that had never been found before. Even though zero-dimensional cOvalent organic cages and two- and three-dimensional cOvalent organic frameworks have been reported before, the researchers say that the synthesis of one-dimensional organic nanotubes was not known before this study was done. The CONTS are better than the carbon nanotubes (CNIS) in how they can be used, how they are made, and how pliable they are, with a higher Brunauer-Emmett-Teller (BET) surface area. An analyte’s specific surface area, or m2/g, can be measured at many different points with Brunauer-Emmett-Teller surface area analysis, which uses gas adsorption analysis. In this case, inert gas like nitrogen flows over a solid sample, or the solid sample itself is suspended in an area of gas.

These CONTS are good candidates for efficient carbon dioxide adsorption, and they also show that they can convert carbon dioxide into carbon oxide when exposed to visible light. The government of India’s Department of Science and Technology had asked for proposals from Indian researchers as part of the Accelerating CCUS Technologies (ACT) program, which worked with other countries in the Association of Carbon Capture and Storage (ACI). Modi said last year that India wants to cut carbon emissions by 1 billion tons and cut its economy’s carbon intensity by less than 45 percent by 2030. That is what he said.

IIT Kanpur professor develops bone regeneration technology
On Wednesday, a deal to sell the technology to a private firm was signed. The ceramic-based combination will
A team of researchers at IIT Guwahati is developing speech technologies for North Eastern languages
‘Speech Technologies for North Eastern Languages’ will be used to make speech technology tools for
Steel mill wastes are recycled by IIT Mandi into useful products
A company in Jammu and Kashmir has come up with green technology that doesn’t use much energy, electricity,
IIT Roorkee surface electromagnetic research can improve RF and microwave device capabilities, boosting satellite communication
Dr. Debidas Kundu is a faculty member at the Indian Institute of Technology, Roorkee, where he is an INSPIRE
IIT-Kanpur has developed a new approach for wastewater treatment
Using the uniform cubical nano-adsorbent is good for the environment because it can be used again. It is also
New brain center at IIT Madras aims to become a global center for neuro-research
The Indian Institute of Technology (IIT) Madras will set up a brain research center, and it’s going to do
IIT Madras researchers have developed an innovative way to obtain high-definition ultrasound images
With ultrasound imaging, people can get real-time images inside their bodies, which uses sound waves to look
IIT Madras and IIT Madras Research Park to host IAS officers, professors, and entrepreneurs
The Symposium is being organized to bring together pioneering brains from academia, government, and business.