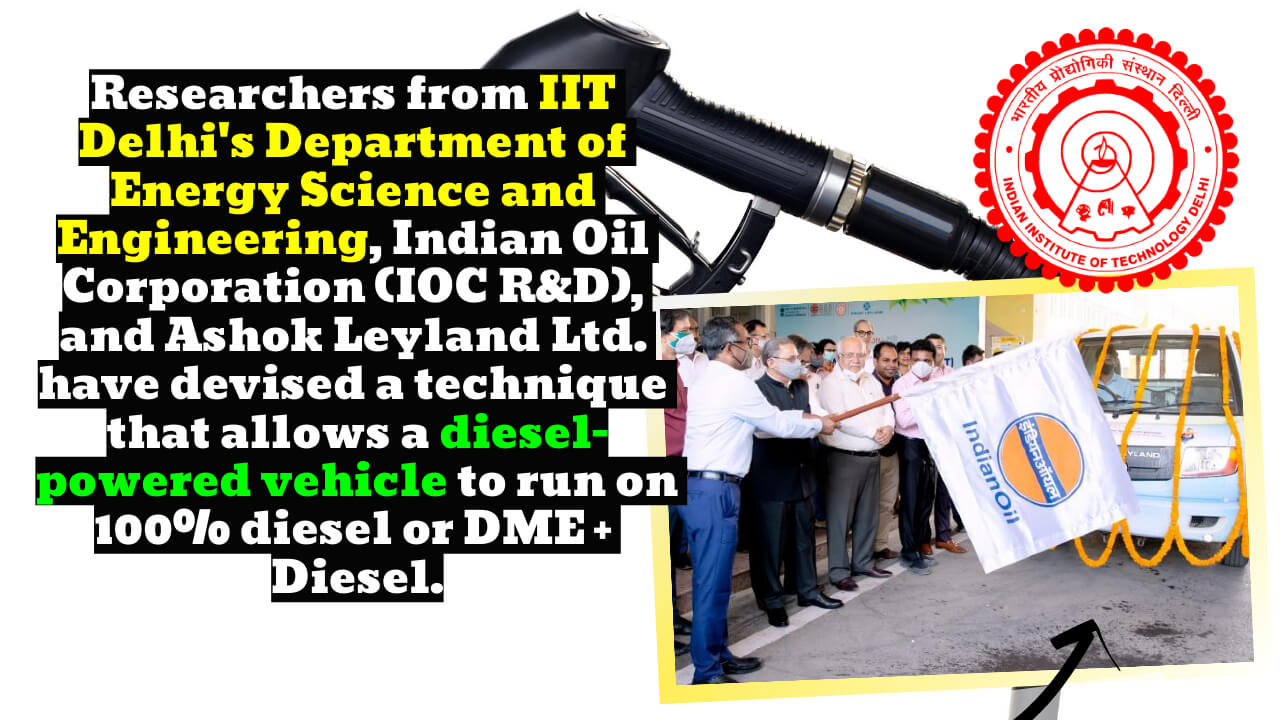 Dimethyl Ether (DME) is a liquid fuel that can be used in place of compression ignition engines/vehicles. DME has a higher cetane number (58) than regular diesel (51). IIT Delhi, IOC R&D, and Ashok Leyland developed the technology.

It can run on either 100% diesel or Dimethyl Ether (DME) plus diesel. This technology was created by researchers from the IIT Delhi’s Department of Energy Science and Engineering, Indian Oil Corporation (IOC R&D), and Ashok Leyland Ltd. There was money for the project from the Department of Science and Technology (DST), the government in India.

Indian Institute of Technology Delhi came up with the flex-fuel engine technology that can run on DME. IOC R&D did endurance and field tests, and Ashok Leyland helped them make the engine oil.

Prof. Subhasis Chaudhuri, the Director of IIT Bombay, gave the award to someone. The last class of IKS 2022 talked about how comics and…

Dimethyl Ether (DME) is one of the fuels that can be used in compression ignition engines and vehicles because it has a higher cetane number (58) than diesel (51). There are many ways to make DME: You can make it from Biomass, Coal, Industrial Waste, Municipal Solid Waste, and Black liquor, which is a byproduct of pulp, by gasifying and using the Fisher-Tropsch process. Then, it can also be made through the dehydration of methanol with the help of a catalytic process. If you live where the temperature and pressure are right, DME could easily change from liquid to gas.

During a discussion about flex-fuel vehicles, Prof. K. Subramanian, the head of the Department of Energy Science and Engineering at IIT Delhi, said that “DME fuel is injected into the engine’s intake manifold, and diesel is injected into the engine cylinder.” The CRDI system controls diesel and DME fuel injection based on how much power the car needs. There is no sound from the engine or the car when it runs at the right DME energy share without a hitch.” It was made by IIT Delhi, IOC R&D, and Ashok Leyland. These are some of the most important things about technology.

Technologies that make cars that can run on different kinds of fuel (Vehicle can run both modes: either 100 percent diesel or DME-Diesel mode)

They were transitioning diesel trucks from diesel to DME as an alternative fuel (first as a Flex Fuel Vehicle, then a 100% DME/alternative fuelled vehicle).

First-ever full-time fellowships for female PhD students at IIT-Roorkee
The SAKUNTALA (Scheme for Aspirants of Knowledge Under Talent Advancement) Fellowship was launched by IIT
This picture of IIT Bombay scholars in a lab sheds light on life at IIT
On Sunday, Professor Abhijit Majumdar shared this picture of an IIT Bombay doctoral candidate in the lab. The
Researchers at IIT Roorkee develop tiles from waste polythene bags
The Indian Institute of Technology (IIT Roorkee) and YB Scientific R&D Solutions have collaborated to
Researchers at IIT Roorkee find a molecule that targets carbapenem resistance in bacteria
Disulfiram inhibits Metallo-b-lactamase, an enzyme that neutralizes last-resort carbapenems. The study was
Technology developed by IIT Guwahati to standardize EVs for India
The Indian Institute of Technology (IIT) Guwahati has come up with a way to rate the motors and batteries of
IIT Kanpur professor develops bone regeneration technology
On Wednesday, a deal to sell the technology to a private firm was signed. The ceramic-based combination will
A team of researchers at IIT Guwahati is developing speech technologies for North Eastern languages
‘Speech Technologies for North Eastern Languages’ will be used to make speech technology tools for
Steel mill wastes are recycled by IIT Mandi into useful products
A company in Jammu and Kashmir has come up with green technology that doesn’t use much energy, electricity,