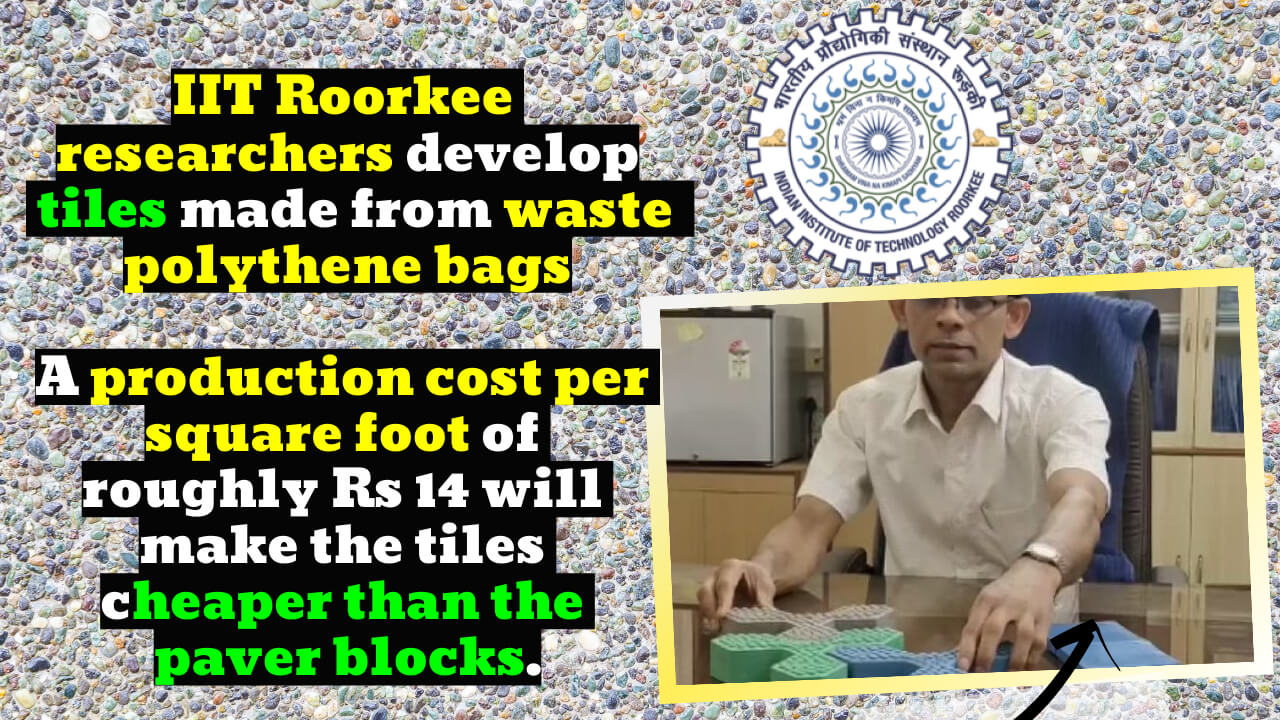 The Indian Institute of Technology (IIT Roorkee) and YB Scientific R&D Solutions have collaborated to create a technology for recycling trash polyethylene packs into paver blocks and wall tiles. Processes may be an interesting choice for waste producers to manage plastic wastes following the Plastic Waste Management (Amendment) Rules 2021.

It’s not just that these products are better at the interlocking, but they also have longer light times. The institute said they aren’t going to break and have a fair value when they’re sold. An IIT Roorkee professor says the technology recycles old polyethylene packets to make cement-free paver blocks. This is a more environmentally-friendly way to make the pavers, Prof. Prasenjit Mondal says. Before they can be made into blocks, the plastic packets must be shredded into small pieces. Then, they’re mixed with other ingredients to make the plastic soften even more. Finally, they’re put into a hydraulic press to be made into blocks.

Eco-friendly: “They can be used in places like building premises and monuments,” Mondal said. They can also be used in landscapes, public gardens and parks, drives, paths, and floor tiles, among other things, he said. For each paver block, about 250 g of waste plastic is used. To cover a 1 sq ft area, about 1.5 kg of waste plastic will be needed. Rs 8–9 is the cost of making each piece.

Paver blocks will be more expensive, but tiles will be cheaper because they will only cost about Rs 14 per square foot to make, it said. The team members were Prasenjit Mondal, Hemant Goyal, and Navneeta Lal, all from the Department of Chemical Engineering at IIT Roorkee. Yash Dua, from YB Scientific R & D Solution, was also on the team.

A company called YB Scientific R & D Solution in Roorkee, Ramnagar, said that India’s amount of plastic waste grew by more than 21% each year in the years 2019–20. This is why they need PRAYASPR. This plastic waste also has low-density polyethylene (LDPE), closing sewer lines. In addition, in India, waste plastics litter the landscape because there aren’t enough ways to dispose of them properly. This has negative effects on the environment. To deal with waste plastics in a more sustainable way, a project called PRAYASPR has been set up by IIT Roorkee.

Researchers at IIT Roorkee find a molecule that targets carbapenem resistance in bacteria
Disulfiram inhibits Metallo-b-lactamase, an enzyme that neutralizes last-resort carbapenems. The study was
Technology developed by IIT Guwahati to standardize EVs for India
The Indian Institute of Technology (IIT) Guwahati has come up with a way to rate the motors and batteries of
IIT Kanpur professor develops bone regeneration technology
On Wednesday, a deal to sell the technology to a private firm was signed. The ceramic-based combination will
A team of researchers at IIT Guwahati is developing speech technologies for North Eastern languages
‘Speech Technologies for North Eastern Languages’ will be used to make speech technology tools for
Steel mill wastes are recycled by IIT Mandi into useful products
A company in Jammu and Kashmir has come up with green technology that doesn’t use much energy, electricity,
IIT Roorkee surface electromagnetic research can improve RF and microwave device capabilities, boosting satellite communication
Dr. Debidas Kundu is a faculty member at the Indian Institute of Technology, Roorkee, where he is an INSPIRE
IIT-Kanpur has developed a new approach for wastewater treatment
Using the uniform cubical nano-adsorbent is good for the environment because it can be used again. It is also
New brain center at IIT Madras aims to become a global center for neuro-research
The Indian Institute of Technology (IIT) Madras will set up a brain research center, and it’s going to do