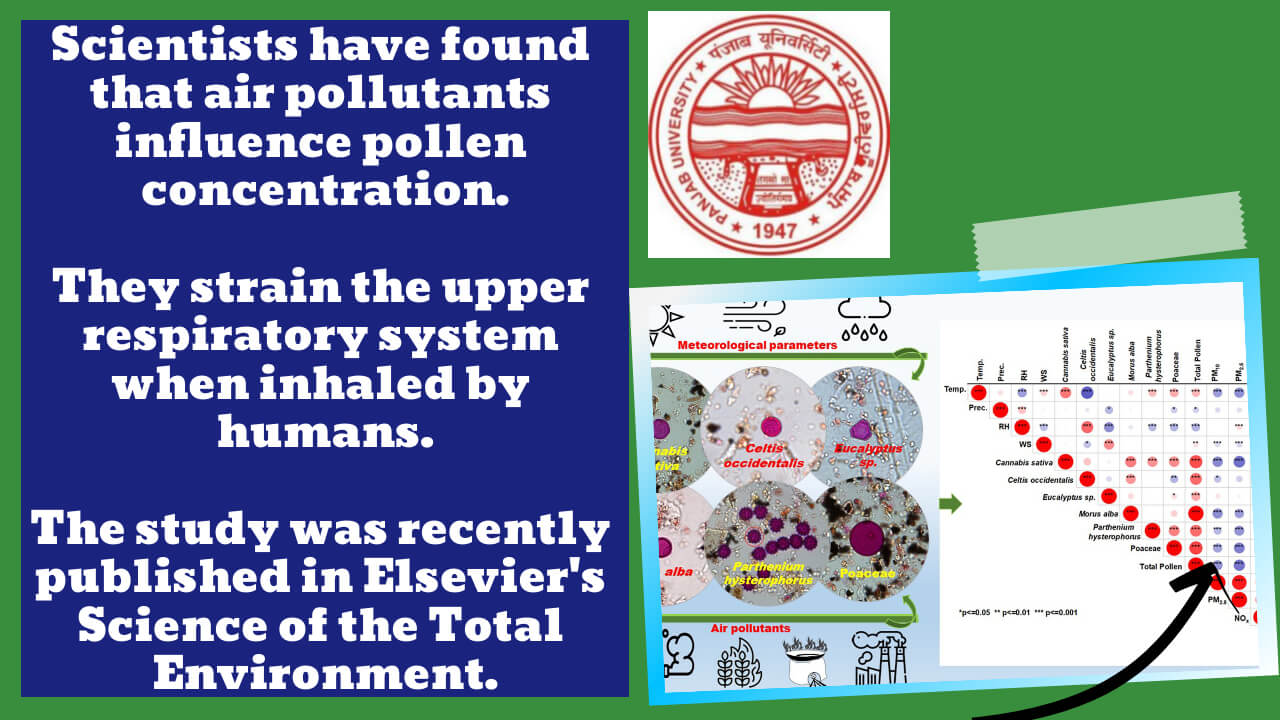 Pollens float in the air and are inhaled. These irritate the upper respiratory system when inhaled by humans. Upper respiratory and naso-bronchial allergies cause asthma, rhinitis, and bronchial irritation.

Each pollen type studied responded differently in response to weather and air pollutants. There were distinct peaks of pollen in low humidity and low precipitation conditions. In October and November, this area is particularly polluted.

Pollen stays in the air and is part of the air we breathe. It puts a lot of strain on the upper respiratory system if people inhale them, though. Some people have asthma, rhinitis, and bronchial irritation because of them.

The type of pollen that floats in the air changes depending on where you live because of different weather or other factors. Pollen floats in the air is a significant factor in people getting allergies in cities. They could interact with each other and make their adverse effects on people’s health worse. Pollen, climate variables, and air pollutants all live together in nature.

This is why Prof. Ravindra Khaiwal, from the Post Graduate Institute of Medical Education and Research (PGIMER), Chandigarh, and Dr. Suman Mor, from the Department of Environmental Studies, looked into the effect of weather and air pollution on the airborne pollen in the city Chandigarh. The group looked at temperature, rainfall, relative humidity, wind speed and direction, and air pollutants like particulate matter and nitrogen oxide. They also looked at how the airborne pollen was affected by these things.

The study was funded by the Department of Science and Technology (DST), part of the Indian government. It is one of the first studies in India to look at how air pollutants and weather conditions affect airborne pollen. The study has just been written up about in Science of the Total Environment, a journal that Elsevier owns.

The study says that each type of pollen had a different reaction to the weather and other air pollutants. In the spring and fall, most pollen types were found. Different peaks of airborne pollen were seen when there was a lot of good weather, like a reasonable temperature, low humidity, and no rain. If the temperature isn’t too hot or too cold, it impacts things like flowering and pollination. However, pollen grains were removed from the air when there was a lot of rain or a lot of water in the air.

According to the study, there was a complicated and hard-to-understand relationship between airborne pollen and air pollutants. Long-term data sets will be used to find out the relationship’s trends.

Prof. Ravindra Khaiwal said that when it comes to the future climate, it is likely that the urban environment will have a significant impact on plant biology and phenology.

Because of this, the study’s findings are helpful because they suggest that air pollutants can affect pollen concentration. This can be looked into more as the data set grows.

There are a lot of complicated interactions between airborne pollen, air pollutants, and climate variables. This study could help us better understand how these things work together. This could help us figure out how to make the Indo-Gangetic Plain region less polluted. This area is known as a place where the air is terrible during October and November.

IITs failed to attract enough research projects, or higher research students: CAG report
All eight IITs failed to attract enough non-government-funded research projects or acquire land for student
Faculty positions at seven IITs are vacant in a range of 5-36%: CAG report
There were vacancies in faculty positions in seven IITs that ranged from 5% to 36%. According to a CAG
Atal rankings for innovation rank IIT-M, IIT-B, and IIT-D as the top three
This year, 1438 Institutes are taking part, almost double the number from the last time. IITs took the lead
Suzuki, Japan, has Joined IIT-H for its Autonomous Vehicle Innovation Center
Suzuki Corporation of Japan has decided to set up its Innovation Center at IIT-H. This will be the first one
IIT Madras researchers reveal the critical role of oxygen stoichiometry in water splitting
Producing hydrogen as an energy source could meet most global energy demands. Much research has gone into
Japanese AI research institute and IIT Hyderabad has renewed their MoU for AI research
The Indian Institute of Technology (IIT) Hyderabad and Japan’s National Institute of Advanced Industrial
IIT Delhi and IIIT Delhi had invited professors to collaborate on research
A joint project between IIT Delhi and IIIT Delhi that faculty members from both schools were asked to work on
IIT Delhi Research Group developed a strategy for chemotherapy that utilizes RBC membranes
Researchers Group at IIT Delhi has developed a new way to use the Red Blood Cell membrane (RBC membrane) for