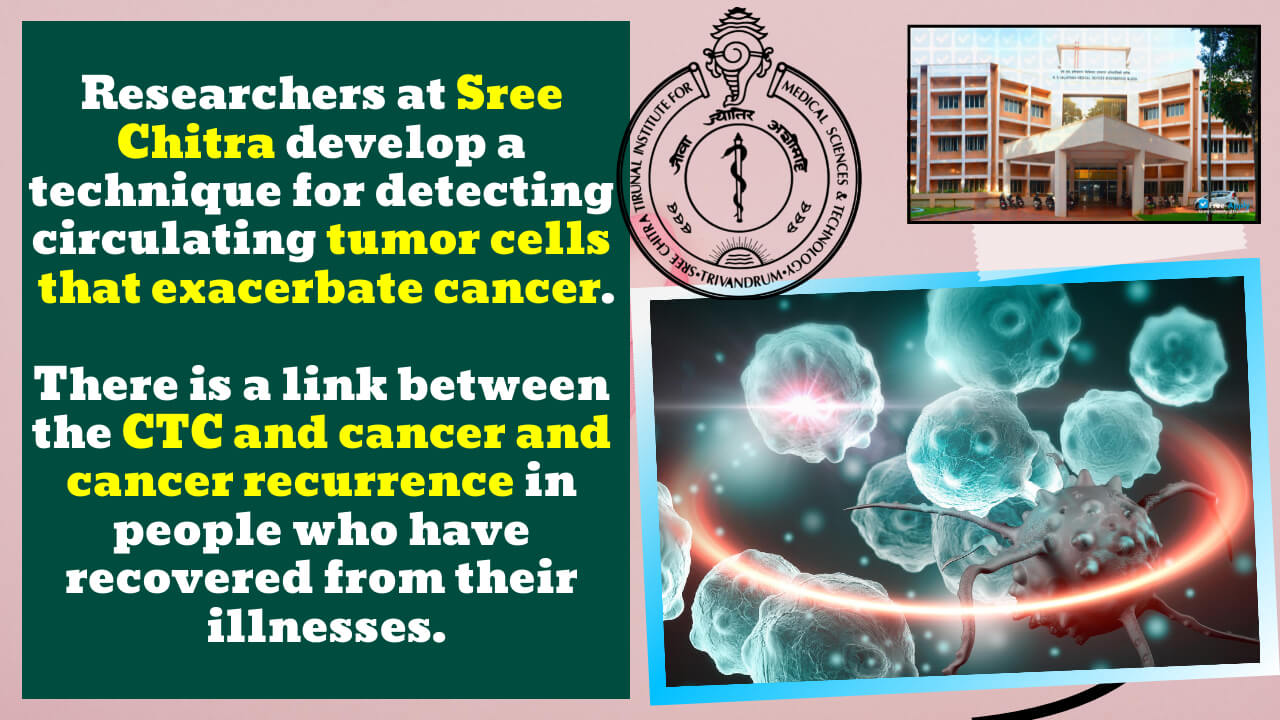 Sree Chitra researchers develop technology to detect cancer-causing circulating tumor cells. A special kit can be used to look for circulating tumor cells (CTC) in a blood sample. CTC makes cancer worse and causes cancer to come back in people who have already beaten it. The Sree Chitra team has asked for money from the Indian Council of Medical Research to pay for a clinical trial.

Sree Chitra Tirunal Institute for Medical Sciences and Technology in Thiruvananthapuram has developed a way to detect metastasis, where cancer cells travel through the blood and form new tumors. This new technology can be used to look for metastasis. Researchers have found that a special kit can be used to look for circulating tumor cells (CTC) in a blood sample. There is a link between the CTC and cancer and cancer recurrence in people who have recovered from their illnesses.

He said that the most important thing about this is that it can detect the possibility of metastasis early on and get treatment.

Under the direction of Dr. Jayashree, K Jibin and V Ramesh Babu are working on the study.

ACS Sustainable Chemistry and Engineering is the journal where they were written about. They have asked for money from the Indian Council of Medical Research (1CMR) to do a clinical study with this technology.

People usually don’t have more than 5 CTC in 10mm blood, but this isn’t always the case. This low number makes it difficult to do tests. To get around this, a nanotag made of gold and graphene will be attached to the antibody that fights CTC. Filters can be used to separate this from the blood sample. It can be done this way to separate CTC from all the other things in the blood. Looking at the filter and graphene in microscopic detail, you can see if the CTC is there.

Because of these things, it’s worth it.

The “cell sense” method is used in the United States to determine if someone is at risk of getting cancer that spreads. New research has found a way to make even this easier. Also, there would be no need for surgery to bring tissues and tests. A liquid biopsy, which looks for signs of illness in blood samples, will be used instead.

Researchers at IIT Guwahati have developed low-cost perovskite solar cells with 20% efficiency
IIT Guwahati researchers have developed a low-cost perovskite solar cell. The developed devices have a power
IIIT Hyderabad has announced a one-year Research Translation Fellowship for working professionals
IIIT Hyderabad is offering a year-long research translation fellowship. The fellows will work with the
IIT (BHU) researchers claim that ‘mosambi peels can prevent cancer and other fatal diseases.
According to IIT (BHU) researchers,’mosambi’ peels may be used to prevent cancer and other life-threatening
IIT Madras aims to become a technology hub driven by collaborating with industry and corporations
The Institute has raised around Rs. 200 crores for CSR projects from more than 140 of the world’s best-known
IIT Mandi Researcher team has studied non-invasive brain simulation techniques mathematically
Transcranial electrical stimulation (tES) is a way to stimulate the brain that doesn’t hurt. It sends an
IIT-Madras Team mimic natural processes to convert saline seawater into drinkable freshwater
A multinational team of scientists has pioneered a novel method of seawater treatment. They enhanced existing
IIIT-H takes on project Telugu Wiki to create Telugu content under “Project Indic Wiki.”
It’s called Project Indic Wiki, and it’s a goal of IIIT-H to make Wikipedia more useful in Indian languages
Researchers at IIT Madras have developed a motion planning algorithm that can think like a human
Researchers at the Indian Institute of Technology, Madras, have developed a new class of algorithms that are