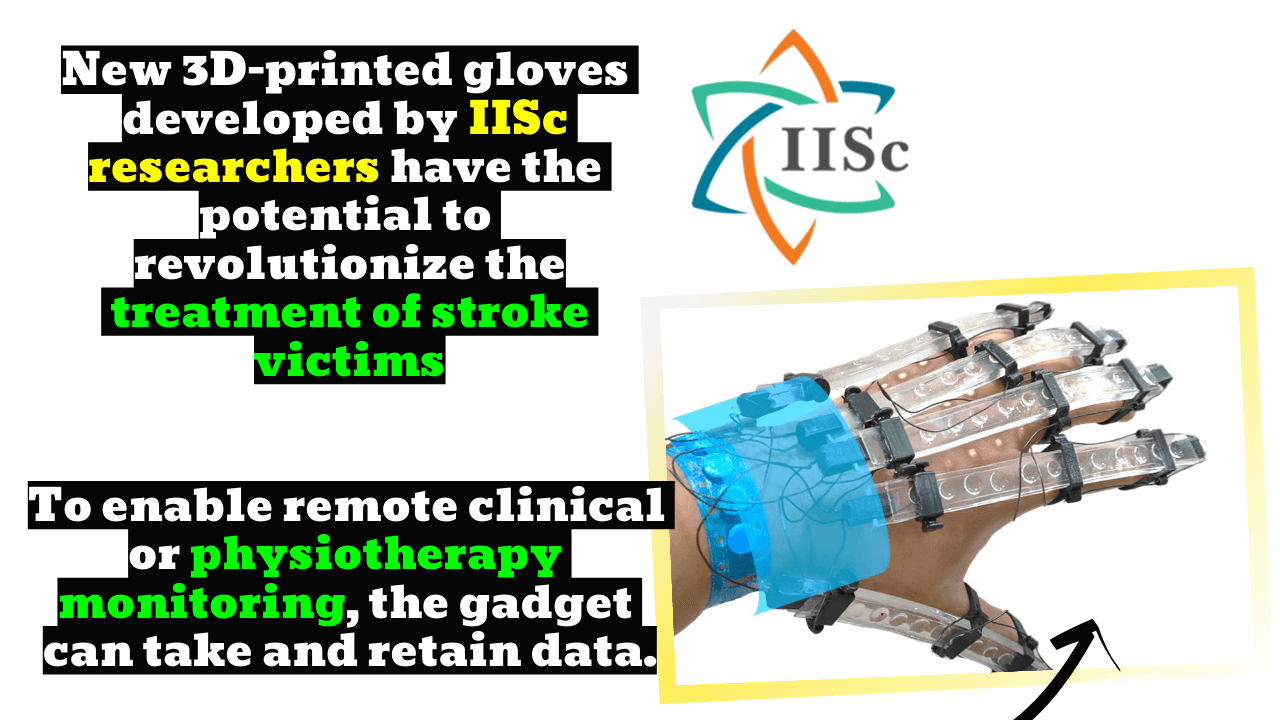 At the Indian Institute of Science, researchers have made a soft, wearable device that can sense how a patient moves their limbs or fingers. They use the basic properties of light to get this information.

It’s possible to control the 3D-printed, custom gloves from afar, which could allow physiotherapists to consult with patients from afar. Physicists have made a device that you can wear that can read the movements of your hands and fingers. The machine can be made to fit each patient’s arm and fingers. It can take and store data, send it over the internet, and be used by clinicians or physiotherapists who can see it from afar.

Researchers at the Indian Institute of Science (IISc.) have made custom-made, 3D-printed gloves that can be controlled from afar. This could allow physiotherapists to work with patients remotely.

People who have had a stroke could benefit from new gloves made with 3D printing.

Researchers in the Department of Physics at the Indian Institute of Science (IISc.) have made a soft, wearable device that uses the basic properties of light to sense the movement of a patient’s limb or finger. They want to help stroke victims. It’s possible to control the 3D-printed, custom gloves from afar, allowing physiotherapists to consult with patients from afar.

“We wanted to make something that was cheap and could be used by anyone at any time. It should be simple to use and give you feedback, says Aveek Bid, an associate professor in the Department of Physics. His team has made the device.

It has been tested for more than 10 months, and there has been no loss in sensitivity or accuracy. The device has been made entirely in India, and it should cost effective. A patent has been filed, and the researchers want to put the device on the market as soon as possible.

Prof. Bid said that quantifiable feedback, like the units of pressure used to squeeze a ball or the angle of a bent leg with a knee injury, is important for doctors to keep an eye on the patient, even if they are far away. Such feedback can also make patients want to do better every subsequent session.

Researchers at the Indian Institute of Science (IISc.) say that the device was designed and built-in India. It is expected to cost less than 1,000. A patent has been filed, and the researchers want to put the device on the market as soon as possible.

Another problem is that physiotherapy often requires daily trips to the hospital. Home visits by professionals or high-tech devices that can monitor patients from afar are ideal, but they aren’t easy to get, and they’re pricey. To solve these problems, the team came up with a way to make custom wearables, like hand gloves, that can be designed, 3D printed, and controlled from afar.

According to Prof. Bid, the idea of the device is that you wear something like a glove, and the physiotherapist can control the device from afar and make your hands and fingers move.

The device can sense many different hand and finger movements, and it can pick up on things like pressure, bending angle, and shape very well.

Refraction and reflection are two of the most important things about light, so the technology that makes the device work is based on them. You can see through one end of a transparent rubbery material with a light source. At the other end is a light detector—flexible material changes when the patient moves their finger or arm, which causes it to change shape. The deformation changes the path of light, which changes its properties. It turns this change in light properties into a unit that can be measured. People can measure how quickly their fingers or arms move because light travels all over the device.

Team member Abhijit Chandra Roy, a DST-Inspire Faculty in the Department of Physics and the person who came up with the idea, said that the device is very sensitive. It can even sense the touch of a butterfly. “Also, the new device can even measure how bent each finger joint is.” Unlike other devices, the new one can measure how bent each finger joint is.

The researchers used a silicon-based polymer that is transparent so they could manipulate light. It’s also soft for comfort and repeated use, and most importantly, it can be 3D printed. It can be made to fit the shape of each patient’s arm and finger. The device can take and store data, send it over the internet, and let clinicians or physiotherapists check on patients from afar.