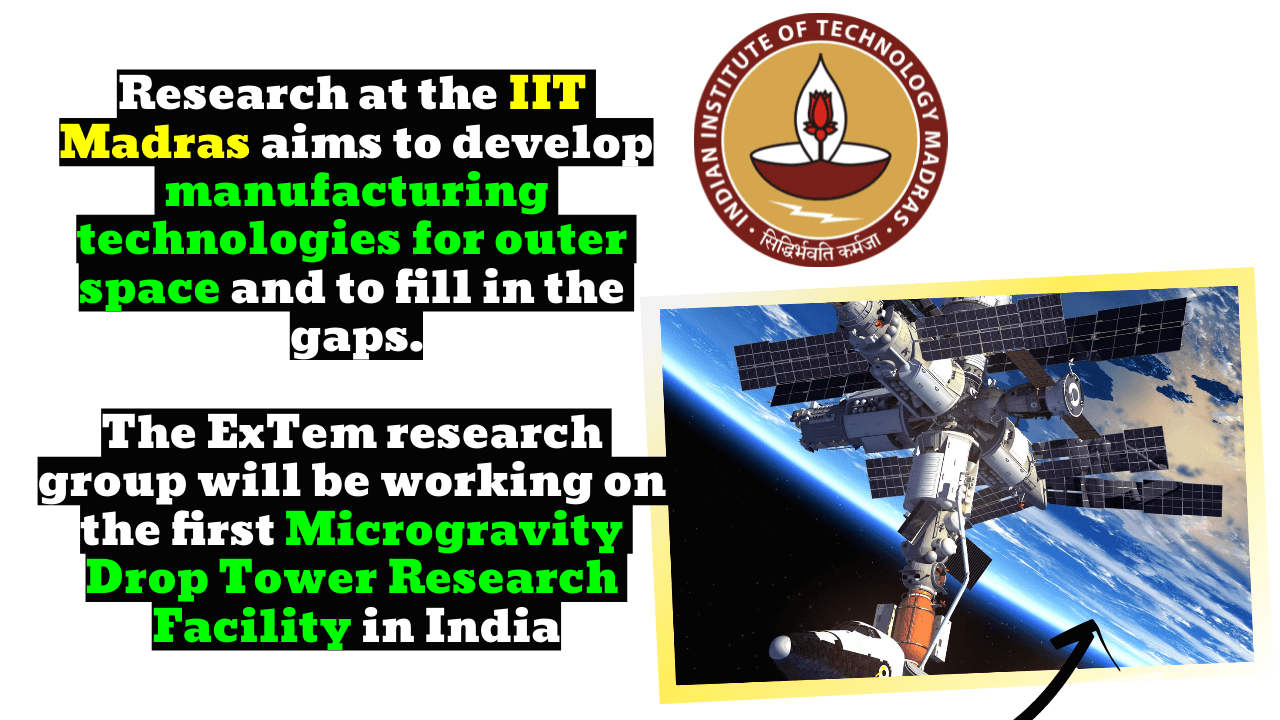 The Indian Institute of Technology (IIT) Madras has set up a research group to develop ways to make things in places other than Earth. Officials said the goal is to fill in the gaps in this area in India.

As part of the Institute of Eminence project, the ExTeM research group has been set up. To get the most out of the energy and materials we have, we need to be able to make things on other planets. The high cost of getting resources from Earth and the lack of resources on ET are likely to be problems.

Indian Institute of Technology (IIT) Madras has set up a research group to develop technologies for making products in places other than Earth and fill the gaps in this sector in India.

According to the team, India is a leader in developing and using technologies for making launch vehicles and satellites.

But, they said, in the near future, we will need technologies that make it possible to make products and assemblies in space and at extraterrestrial locations that can be used both in space and brought back to Earth.

The researchers want to solve these problems by creating a wide range of manufacturing technologies, such as 3D printing of metals and functional optical polymers, water-less concrete made from martial soils, single diamond crystals, solar cells, and metal foams.

ExTem is a research group trying to find ways to make things on other planets. They will be working on the first Microgravity Drop Tower Research Facility ever built in India. It is located at the National Centre for Combustion Research and Development at IIT, Madras, and is one of six drop towers worldwide.

“If humans want to explore space like never before and build settlements in faraway places, they will have to spend a long time on a spacecraft to get there.

Sathyan Subbiah, Principal Investigator of the ExTeM Research Group at IIT Madras, told PTI, “Long-term human space missions are only possible if they are less reliant on Earth.” “This requires the ability to make and assemble needed products in space, in orbit, and at extraterrestrial locations, and to recycle materials effectively,” he said.

The ExTeM research group has been set up as part of the Institute of Eminence (IoE) project.

“The center is currently running several drop tower experiments to test manufacturing processes like 3D printing of different engineering materials (metals, polymers, etc.), metal foaming, and diamond coating, among others, so that manufacturing can be done in space.

“Also, the allure of microgravity and how it makes it easier to control and shape material structures cannot be ignored,” he said.

The manufacturing technologies needed for space will differ from those used on Earth. This is because space is limited, power is limited, microgravity has an effect, and it is hard to keep track of what goes in and what comes out of a process and to recycle waste effectively.

“The space race, intending to live and work in extraterrestrial (outside Earth) spaces, is the main focus of the scientific community in this century. The likely problems are the high cost of getting resources from Earth and the limited number of resources on ET.

“To solve these problems, we need the extraterrestrial manufacturing (ExTeM) capability to make the best use of the energy and materials we have,” he said.

Researchers think that these kinds of processes will be used to make products in the future that will be sold by private companies using specially designed factories that float in orbit around the Earth or in other places in space.

Amit Kumar, the co-principal investigator of the research group, said, “Scientific research and development need to be done in microgravity conditions to address the above challenges, such as safety (for example, fire safety), understanding how natural fluids and materials behave, even in energy-driven processing conditions.”

“Drop towers are one way to get microgravity conditions on the ground. There are other ways, too.” “Cost-effectiveness, short turnaround time, and high-quality microgravity make drop tower ideal for sustained microgravity experiments at least at the first level. This makes it easy for both academic and space organizations to use,” he added. PTI GS GS TDS TDS This report is automatically made by the PTI news service. ThePrint is not responsible for its content.

Follow our channels on YouTube. Telegram Why news media is in trouble and how you can fix it India needs free, fair, non-hyphenated, questioning journalism even more now that it is facing multiple crises.

But the news media are in a crisis of their own. There have been tough layoffs and pay cuts. The best journalism is shrinking and giving way to cheap prime-time shows.