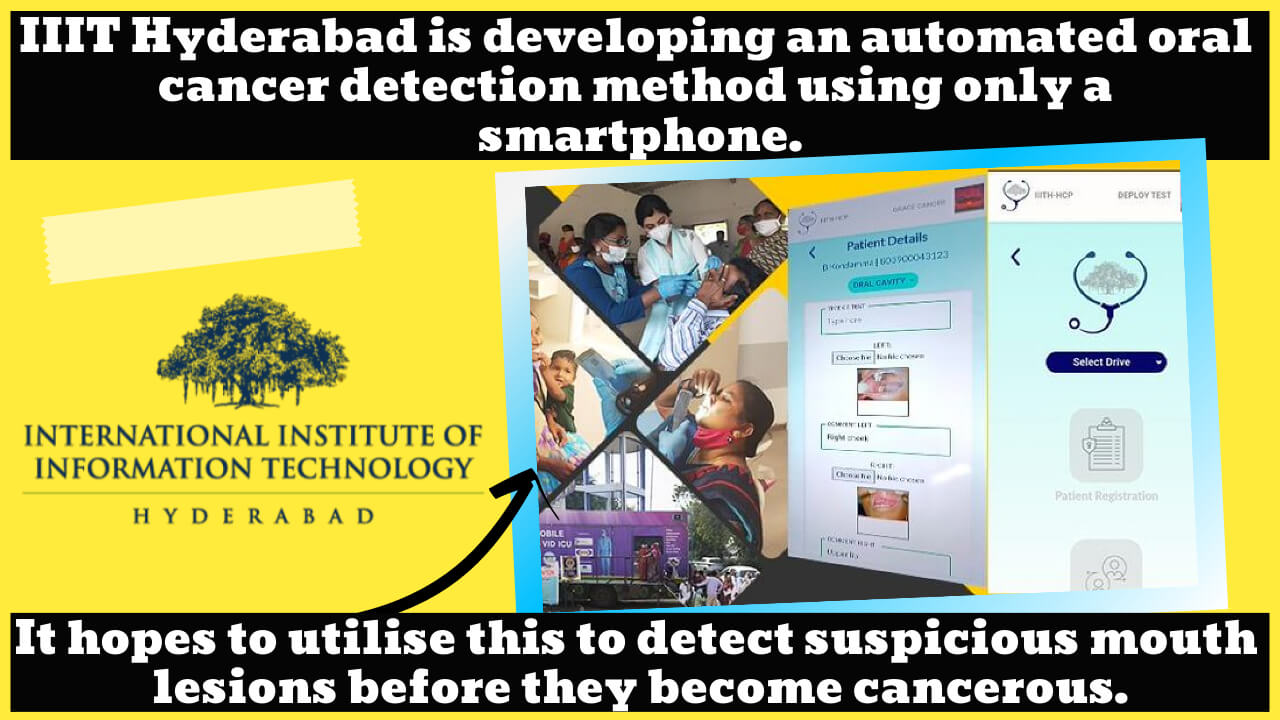 An AI programme could classify photos of the oral cavity captured by cheap phone cameras as cancerous or benign. Grace Cancer Foundation and BioCon Foundation are collaborating on the project. It intends to use this to detect aberrant mouth lesions before severe cancer stages.

The International Institute of Information Technology Hyderabad is working on an automated solution that only needs a smartphone to screen for oral cancer at an early stage. It wants to use this to tell people when something is wrong with their mouths before they worsen and become cancerous.

The project is a collaboration between the Grace Cancer Foundation and the BioCon Foundation, which came about after the Grace Foundation noticed that most people who went to rural cancer screening camps were diagnosed at a late stage. Foundation CEO and Director Dr. Chinnababu Sunkavalli says that its efforts to find and screen for cancers early through its mobile camps were hampered by the infrequent availability of highly skilled medical professionals like oncologists who can look inside the mouth and interpret x-ray results right away.

Afterward, the Foundation contacted IIIT-Hyderabad. Then, the two worked together to find an AI algorithm to flag images of the oral cavity, taken with simple phones, as either malignant or benign.

Tests have been done on the app, and it will be used for the first time to screen for oral cancer. Dr. Vinod says that in addition to taking pictures of oral cavities, they can also keep information about the patient and any follow-up reports that come with the picture.

As a result of BioCon Foundation’s similar project, the IIITH team has now teamed up with them as well.

A doctor at iHub-Data says that “Apart from the photos of the mouth, our model will also take into account the person’s family and medical history, as well as their vitals and blood tests.”

Researchers at IIT-Guwahati have developed a low-cost charcoal retort reactor
Charcoal is commonly utilized as a heating fuel in homes and businesses. While most developed countries
IIT-BHU alumnus Jay Chaudhry has donated $1 million to the IIT-BHU Foundation
The CEO of an information security company has given $1 million to the IT-BHU Foundation. Jay Chaudhry
IIT Patna Researchers are working to develop a system that will keep boiler vapor explosions at bay
Artificial Intelligence and machine learning may soon be used to make new technology for predicting and
IIT Kanpur professor says that COVID-19 third wave likely to end in April
IIT Kanpur’s professor says that the third wave of the COVID-19 pandemic will be even worse than the first
Vivek Vaidya, an alumni of the IIT Delhi, will donate Rs 10 crores to the Institute’s endowment fund
Vivek Vaidya, an IIT Delhi alumni, would donate Rs 10 crores to the Institute’s endowment fund. Vivek Vaidya
IITs failed to attract enough research projects, or higher research students: CAG report
All eight IITs failed to attract enough non-government-funded research projects or acquire land for student
Faculty positions at seven IITs are vacant in a range of 5-36%: CAG report
There were vacancies in faculty positions in seven IITs that ranged from 5% to 36%. According to a CAG
Atal rankings for innovation rank IIT-M, IIT-B, and IIT-D as the top three
This year, 1438 Institutes are taking part, almost double the number from the last time. IITs took the lead