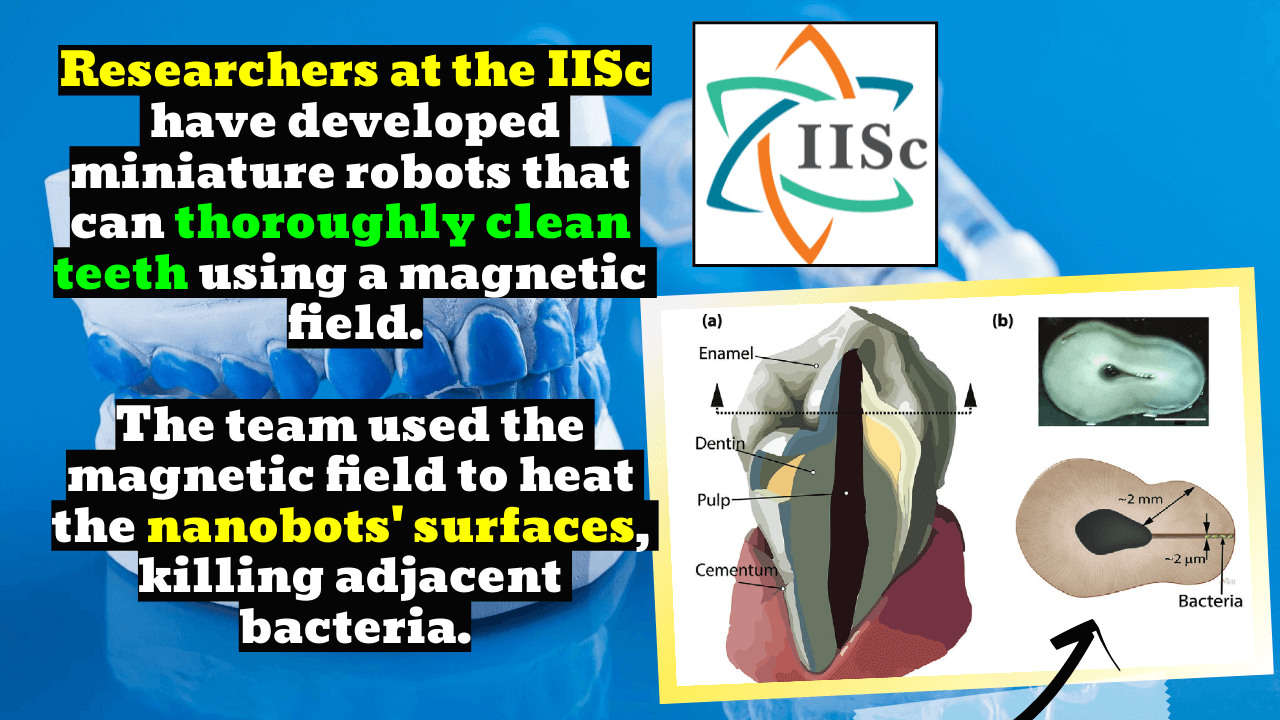 With the help of a magnetic field, tiny robots on the nanoscale can kill bacteria deep inside the teeth. Researchers at the Indian Institute of Science (IISc) Bengaluru did this study.

Millions of people get root canal treatments every year to get rid of tooth infections. The technology could make it easier for the millions of people in India who need root canals to get the care they need. They are also working on making a new kind of medical device that can be put in the mouth.

Scientists at IISc have made nano-sized robots that can kill bacteria deep inside the teeth and make root canal treatments more likely to work.

Researchers at the Indian Institute of Science (IISc) Bengaluru have found that tiny robots that can be moved with the help of a magnetic field can help kill bacteria deep inside the teeth and make root canal treatments work better.

Millions of people get root canal treatments every year to get rid of tooth infections. The procedure involves removing the infected pulp and the soft tissue inside the tooth and flushing the tooth with antibiotics or chemicals to kill the bacteria that cause the infection.

But the treatment doesn’t always get rid of all the bacteria. This is especially true for antibiotic-resistant bacteria like Enterococcus faecalis, which hide in tiny canals in the tooth called dentinal tubules.

“There are very small tubules in the dentin, and bacteria live deep in the tissue. The way things are done now is not good enough to kill the bacteria inside, “Shanmukh Srinivas, a Research Associate at the Centre for Nano Science and Engineering (CeNSE) and co-founder of Theranautilus, a startup that was started at the IISc and is run by IISc, said this.

In the study published in the journal Advanced Healthcare Materials, the researchers made helical nanobots out of silicon dioxide coated with iron. These nanobots can be controlled by a device that creates a low-intensity magnetic field.

The nanobots were then put into tooth samples taken out, and their movements were followed with a microscope.

By changing the magnetic field frequency, the researchers were able to make the nanobots move wherever they wanted and go deep into the dentinal tubules.

“We’ve also found out that we can get them back; we can pull them out of the patient’s teeth, Srinivas said.

“The team was able to change the magnetic field in a way that caused the nanobots’ surfaces to heat up, killing bacteria nearby. No other technology on the market can do this, “Debayan Dasgupta, a co-founder of Theranautilus and a researcher at CeNSE, said.

Scientists have used ultrasound or laser pulses to make shockwaves in the fluid used to flush out bacteria and dead tissue. This was done to make root canal treatment more effective.

But these pulses can only reach a distance of 800 micrometers and lose their power very quickly. The nanobots were able to go much deeper, up to 2,000 micrometers.

The researchers said that using heat to kill the bacteria is also safer than using harsh chemicals or antibiotics.

They used mice to test the dental nanobots and found that they were safe and worked well.

The researchers are also working on a new medical device that can easily fit inside the mouth and let the dentist inject and move nanobots inside the teeth during root canal treatment.

“This technology is almost ready to be used in a clinical setting. Even three years ago, this seemed like something from the future. Ambarish Ghosh, a professor at CeNSE, said that it is exciting to see how a simple scientific question turns into a medical treatment that could help millions of people in India alone.